Book review
Encerrados: Latin American Prisons
“Prisons are a reflection of society, a mirror of what is happening in a country, from small dramas to the great social and economic crises”—an unflinching exploration of South America’s prisons that offers a piercing look at one aspect of the continent’s contemporary...
Photographs by Valerio Bispuri
View Images

Encerrados: Latin American Prisons
&#8220;Prisons are a reflection of society, a mirror of what is happening in a country, from small dramas to the great social and economic crises&#8221;—an unflinching exploration of South America&#8217;s prisons that offers a piercing look at one aspect of the continent&#8217;s contemporary state of being.

Italian photographer Valerio Bispuri spent ten years in South America photographing 74 different prisons. Although he has worked all over the world, Bispuri has spent the most time in South America, living in Buenos Aires for more than ten years. His astonishingly ambitious project, entitled “Encerrados,” combines photography, anthropology, and journalism to try to understand the continent through its prisons, which he feels represent the brutal and hidden reality of a country. As he says in his artist statement:

“Prisons are a reflection of society, a mirror of what is happening in a country, from small dramas to the great social and economic crises […] I chose to explore the depths of the prison context not so much to denounce a situation often at the limits of survival, but to recount what still unites and divides South American today.”

The result of his long work is humbling and essential. His photographs go beyond depicting lives of individuals who we see as criminals to depict universal human truths such as inequality, suffering, and survival.

In the female ward of a maximum security prison in Rio de Janeiro, a woman strikes a ferocious flamenco pose, transforming the cluttered 18-person cell into a dancehall stage. Bispuri manages to capture a natural spotlight on her amidst the dark crevices of the cell.

This is Bispuri’s forte: his play with light and dark is extremely evocative. In his photographs, fragments of light and life emerge from the black frames of the pages, the silver gelatin seeming to literally rise out of a dark unknown. In prison, light is a precious, rare thing. Amidst all the walls, barricades, makeshift doors and laundry hung to dry, Bispuri captures light as a force that separates inside life from outside, an element that penetrates and illuminates even the darkest cell. As Eduardo Galeano, Uruguayan journalist and writer says in his foreword,

“This work throws painful light on the reality of prisons in our Latin American continent, which is in its turn a metaphor for the life that millions of people, guilty of poverty and neglect, must endure. The photographs penetrate so deeply that they resemble X-rays.”

A guard stands in a dark hallway looking out at the light. One ray from the door crack divides the frame, marking the separation of outside and inside. However, the boundaries are not so clear: like the prisoners, the guards live much of life on the inside. For most inmates, life before being incarcerated was charactericized by the squalor, lawlessness, violence and mean fight for survival that we associate with prison. The photographs blur this safe inside/outside boundary—a point Italian writer Roberto Saviano makes in his insightful introduction:

“Valerio Bispuri photographed prisoners, cells, but his camera was on something else. This was the lack of freedom that often precedes and pursues the life of whoever ends up in prison.”

Bispuri’s use of framing and blurring is particularly effective at shedding light on this lack of freedom. He frames his subjects with their natural surroundings: barbed wire, metal bars, and corrugated iron crop, cut, and separate people into slivers sometimes as small as eye-slits. We are left looking at limbs, body parts, half of a woman’s face, for which we have little context or backstory. In other photos, faces are blurred, identities indistinguishable in the heat and movement of packed cells or hallways. We understand that the people will remain anonymous, their stories unheard by us, but this repetition of human parts reminds us of the universality of their condition. As Saviano says in the introduction:

“Bispuri revealed the traces of humanity in those people and when you recognize yourself in another person, the worst person possible, perhaps you manage to comprehend that his humiliation is yours.”

The most poignant photographs are those that put the dense, contained life of these prison-cities into a larger scale. In one shot, we see the prison courtyard from above. From just a little bit higher up, we can see the mountains, a wide sky, and storm clouds bunching around a winged statue of saint on a nearby hilltop that prisoners, below a high wall, will never see. Bispuri’s work sobers us. His ambiguous yet powerful photographs do not spell out any easy conclusions, but instead leave us to imagine how the narratives will go on. We must find our own way to reconcile ourselves with the sliver of harsh reality that he sets before our eyes. 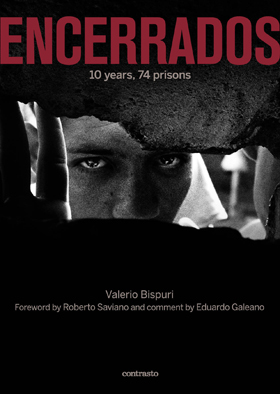