Interview
Street Dreams
Thanks to a chance encounter with photography, Vicky Roy transformed his life from train station ragpicker to internationally exhibited artist. In this interview, he recounts some of his inspiring, almost cinematic, life-story.
Photographs by Vicky Roy
View Images

Street Dreams
Thanks to a chance encounter with photography, Vicky Roy transformed his life from train station ragpicker to internationally exhibited artist. In this interview, he recounts some of his inspiring, almost cinematic, life-story. 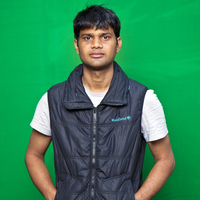 Vicky Roy’s childhood flashes before him like a film: Born to a poor family in Purulia, a city in West Bengal, he was raised among six siblings. His father worked as a tailor and it was his dream to see Roy educated. Thus, Roy was sent to his maternal grandparents’ home in the hopes that they would be able to afford tutoring for Roy—but the talented boy had other plans.

At his grandparents’ house, Roy was beaten for every tiny mistake. At the tender age of 11, he decided he had had enough and ran away from his home. With 900 rupees in his pocket, he arrived at the New Delhi Railway Station. Recalling this vivid experience, he remembers only joy upon arriving in the city—the city he now calls home.

Still, things weren’t easy for the young run-away. At first, he worked as a rag picker at the railway station and later as a dishwasher at a roadside eatery. Like countless other youths in New Delhi, Roy seemed stuck in his position. But fortune smiled upon the young boy—he was picked up by the NGO Salaam Baalak Trust, whose mission is to provide a nurturing environment for the city’s street children.

At the Trust, his life took a new turn. Most importantly, it was there that he met his saviour, the camera. As his story turned to this chapter, he asked me, with beaming eyes, “Don’t you think this sounds like a typical 70s Bollywood movie?”

His chance rendezvous with photography occurred when the Trust conducted a photography workshop for the children living there. The man who gave the course revealed to the students that he was able to travel quite often thanks to his work as a photographer. Upon hearing that, Roy was hooked. “From the beginning, I saw photography as a means to travel. I was overjoyed to take up something that would give me the opportunity to be on the move.” After finishing the workshop, Roy was so motivated, he decided to pursue a professional photography course under the guidance of the renowned Indian photographer O.P. Sharma.

The idea for the series “Street Dreams” emerged from this time in the shelter. “When I started photography, I hardly knew the world—just my home…the shelter home. And of course, I had a shortage of money. Hence, I decided to start by taking on a project which was quite feasible.”

But even as Roy began to take photography more seriously, he still had a child hidden inside him. This was essential to producing the work. “On certain bright evenings, I took them to India Gate and Children’s Park. We used to play games together and I would become another kid. I used to lie down in mud with them and laugh out loud, eat the same food they ate and talk like them. They trusted me and let me shoot however I wanted. As I became one with them, they saw me as part of their clan.”

The street children had their dreams too. “All of them want to do something good with their lives. In the mornings, besides having to survive the daily struggle of living on the streets, they go to school. In the evenings, they can be found selling balloons to make some extra money.”

That is why it was so special for Roy to be able to give the children a glimpse of greater possibilities: “When the photos were displayed in an art gallery, I took them with me to see the show. Seeing themselves on the walls, they giggled and laughed with excitement. It was a big achievement to hear their familiar laughter.”

Thanks to this one project, Roy’s life changed: “I was once a street kid who had no dreams but to survive day by day. I was looking for someone to help me and give me an opportunity to do something. Instead, my photos gave me that chance. Now my life has completely changed for the better.”

Roy feels delighted to know that a child who ran away from home had the opportunity to become an internationally published photographer. “It is a respected profession and I like what I do…it feels great that others from all over the world can admire and understand my work.”

But Roy also makes sure to stay humble. When he first began to experience success as a photographer, his friends started showering him with praise. The compliments began to go to Roy’s head—but not for long: “One day, one of my mentors called me into a coffee shop. He told me clearly and straightforwardly how I had been behaving: impolitely and bragging about myself to others. Instantly, I saw myself in the mirror. I broke down. I promised my mentor (and myself) to take this perspective to heart.”

Indeed, throughout our talk, Roy was quick to acknowledge the utmost importance of all the teachers he has had: from the Salaam Baalak Trust, to the many individual mentors to his “life-changing” year at the ICP. Countless people have helped him in his development as a photographer and a person along the way. From all that he has learned, Roy has a few words of wisdom: “Work hard, keep moving and make mistakes. That’s how you will keep learning and also remind yourself that there’s always room to grow. But most importantly of all: stay grounded. There will be difficulties and there will be successes but staying grounded will always serve you well.”

More of Bhumika Popli’s writing can be found at Aksgar magazine.