Book review
to Hans
A quiet ode to a brother loved and lost, Vivian Keulards’ book “to Hans” finds a form to dwell on the human stories behind addiction, and the complex web it spins around those it touches.

to Hans
A quiet ode to a brother loved and lost, Vivian Keulards’ book “to Hans” finds a form to dwell on the human stories behind addiction, and the complex web it spins around those it touches.

The first image in Dutch photographer Vivian Keulards’ book to Hans is an old archival one from her family album, depicting her and her older brother as small children in 1974. Standing in front of their house in the late-afternoon light they wear helmets and grin up into the camera, his arm around her, their small frames throwing long shadows across the lawn. The image is all washed out orange and warm tones, taken on Kodachrome or Polaroid SX-70, perhaps. Several blank pages later, the next photograph is markedly cooler and starker; part of a concrete-lined pond seen from above on a dark, grey day. Most of the images from here retain this palette. What follows are rainy reflections, shadowy doorways and beds unslept in at the first light of morning. Occasionally, there is a portrait with the face blanked out, or a still life staged for the camera.

In to Hans, Keulards finds a way to speak for the first time about her brother’s addiction-related death after almost 15 years of her family keeping it—and his struggle leading up to it—under wraps. “It’s a personal story with a universal mission: to show the human story behind addiction,” she writes. Her brother’s illness became taboo, wrapped up in shame, but at some point, she says, she decided to “open up the curtains. With all the consequences. Good and bad…” This book has been the result. Hans, of course, had a personal trajectory of addiction—a story of how one vice replaced another until eventually something bigger than him took his life—but Keulards doesn’t tell us any of those specifics here. At least not directly. She tells us more in interviews and on her website, but it feels right to only try to read the book with what parts of him we’ve been given in the pages.

It would be almost impossible to try to shrink down and crystallize a whole life, with all of its complexities and pains and joys, neatly into a set of images, but what we can do with photography—what is vital to do with photography—is to use it to feel around the edges of experiences and how they move us, to visualize them in ways other forms of language cannot, and that is what Keulards does with great sensitivity here. She refers to her process of making this book as a sort of organizing of thoughts and feelings, and we come to learn that it is not so much about Hans, but more about the presence and subsequent loss of him and how that eclipsed her own existence over the years; an exercise in how to make art about yourself through the impressions someone else has left on you. Throughout the sequence of the book, Keulards travels to the hotel in Berlin in which Hans died in 2005, confronts the space, opens the curtains and looks out of the windows, wondering what he saw or thought about in those last hours. Photographs detailing all of that journey are catalogued here.

The book also features several images of parts of a body—her body it seems—close-up, in relief, like fragments of a statue, broken up and sliced across pages, submerged in water, her hands pulling at her own skin. In one image that folds out towards the end of the book we see her back arched forwards with rose thorns placed all the way along her spine, appearing creature-like with protective spikes. These pictures specifically work like small reminders throughout the sequence that bodies are worn, and can be worn away, by the things that happen to us and the people we love.

In his accompanying essay to the book, Looking into the sun, Ralf Mohren writes about his own experience of being an alcoholic. “Why me but not her?” asks the writer regarding his own addiction and his sister’s lack of. Keulards’ question, in pictures, is the exact opposite: why him and not me? Mohren refers to himself as a puzzle, and that stuck with me, reminding me of my own father, who suffered with alcoholism throughout my childhood. It made me think of space, and how an addicted person’s mood can shape a whole room, their anger or sadness or joy swelling up and filling every crack and crevice, and every pocket of time in the day. “It eats away at you from within. Destroys you. Devours you alive,” continues Mohren, “Oh, and it devours all those around you too…”

All of the images in to Hans work like puzzle pieces, scattered out across pages, with endless white space between them. Keulards has made it our job as the viewer to sit and spend time with the book and piece the story together. Her use of Japanese binding places us next to her as she “opens the curtains.” There are surface images we can see clear as day—inside the room, as it were—and then gauzy, ghostly ones printed on the underside of the folds, inaccessible for a proper look, symbolizing what’s beyond the curtain. Those pictures haunt the visible ones, and the dichotomy between them reminds us of what’s said and what’s not said; what’s on the surface and presented, and what lingers in the lacunae beneath.

The whole time I was writing about Keulards’ book, I was thinking about a literary meditation the American poet and essayist Anne Boyer wrote on her diagnosis with cancer in The New Yorker last year. In it, she talks at length about the state of illness, or ‘being ill’ and its slow spread into all parts of her life, and details the moment she told her daughter that her genetic test had come back negative, meaning that she doesn’t have to worry that she is predisposed to getting it too. Her daughter’s response floored her: “You forget,” she answers, “that I still have the curse of living in the world that made you sick.”

These powerful words work here with Keulards too, because addiction is an illness, and in some ways it feels like that is what she’s saying. “The cause then: something in the genes, predisposition, upbringing. Or not. Just a series of switches in the wrong position. We don’t know exactly,” Mohren says eventually. “It’s not a huge disaster. What’s more important is how we deal with it. And when I say ‘we’, I mean every one of us.” Punctuating the edit with more family pictures, Keulards makes it clear that Hans’ life—in all its beauty—affected hers in good ways, regardless of its tragic end.

When I was 9 or 10 or 11 years old—I don’t remember the exact year—my father turned yellow. I remember thinking how fitting it was that it was Autumn and he’d turned with the leaves. It was alcohol-related jaundice, I found out later, but at the time I wondered if it was possible that bodies could turn different colors based on the things we’d done—as if our emotional temperatures could color our outward appearances. How odd that he’d turned yellow then, I thought, before I really understood. Of all the colors, red would surely have seemed more fitting. I don’t know why Keulards chose yellow for the cover of to Hans—it’s one of the only design choices she doesn’t explain—but in many ways it works as the color most associated with the ripple-effects of addiction.To me, at least, but I’d imagine to others whose lives have been altered by the presence of a person addicted too. “Addiction doesn’t exclude anyone…No race, no orientation, not your background, not the color of your hair. Not if you have yellowed or snow-white teeth…” writes Mohren. Somewhere on the way to mustard but not quite, the yellow of Keulards’ cover has parts of a xerox-quality gridded image of Hans printed upon it. It makes his face the brightest bit of the book. 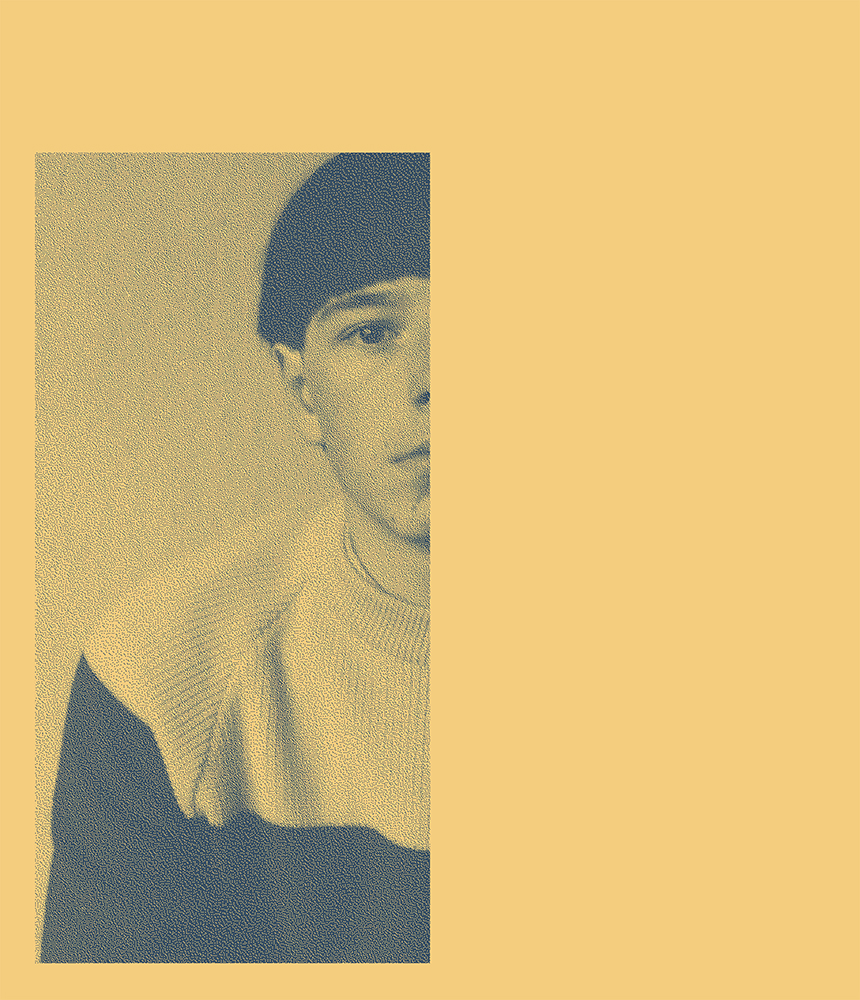