Book review
The Outlands
This three-volume publication draws on the mass of outtakes from William Eggleston’s 1976 MoMA exhibition to explore his luminous approach to color photography.

The Outlands
This three-volume publication draws on the mass of outtakes from William Eggleston’s 1976 MoMA exhibition to explore his luminous approach to color photography.

William Eggleston’s photography, drawn from his immediate surroundings, Memphis and its environs, offers one of the most intensive and concentrated responses to place in the history of photography. Eggleston’s remarkable pictures are the result of observing the world seemingly without judgement and certainly without imposing a commentary upon it. His pictures are a response to the way things look as they are photographed—and importantly in color. It was his use of color and his receptivity to its formal potential within photography that made his work so exceptional. But it is now 45 years since this work was first shown. What does his photography mean today when color photography has become so familiar and so ordinary?

The three-volume boxed set The Outlands returns us to the first in the Steidl publication series, Chromes, since both are drawn from the mass of color transparencies that remained after John Szarkowski’s selection for Eggleston’s groundbreaking 1976 New York MoMA exhibition. Selected and edited by Eggleston’s two sons, William and Winston, together with editor and writer Mark Holborn, The Outlands like Chromes shows us the riches Szarkowski missed. In The Outlands volumes, this amounts to 400 plates of previously unseen pictures. In total, Eggleston made 5,500 transparencies between 1969 and 1974.

Like the MoMA show, The Outlands also includes family pictures. But the range and breadth of imagery is more expansive than Szarkowski’s selection, offering a vivid portrayal of the American South in transformation, both the lingering traces of the Depression-era and Antebellum past and the colorful parade of signs from more recent commercial architecture—markers of what William Eggleston III refers to as “the encroaching suburban sprawl of Memphis.”

The title The Outlands is taken from the family name on a sign of a suburban house among the early pictures presented in Volume One. As a title, The Outlands works well in its suggestion of the edges and peripheries of places that Eggleston often photographed. But it also perfectly suits what these pictures are: outtakes. Since their selection involves a return to the transparencies remaining after those edited for Chromes, they are second outtakes. Only there is no sense that they are secondary or second rate.

As in their three-volume Los Alamos Revisited and the ten-volume The Democratic Forest, Steidl continue to show us the extraordinary and impressive immensity of Eggleston’s color work. And none of these books disappoint. In many ways, such remarkable publications offer a perfect form for the presentation of his photography. For both Chromes and The Outlands, digital scanning and printing technology has meant the intensity of the colors of the transparencies have not been lost and in some cases original color has been restored in the reproductions. Gerhard Steidl even suggests the reproductions have a quality akin to the dye transfer printing process that was used for the photographs in Eggleston’s MoMA exhibition. Eggleston had been drawn to the expensive dye transfer print because of its “overwhelming” color saturation, which meant it was more dramatic and offered a less faithful depiction than the C-print—“by the time you get into all those dyes, it doesn’t look at all like the scene, which in some cases is what you want.”

Mark Holborn notes that with the passing of time the photographs in The Outlands have become “social documents.” Most photographs take on a documentary value over time. These transparencies do invariably give us a document of Memphis and the Delta in the late 1960s and early 1970s. But much as they might accrue historical interest and even though a few pictures acknowledge the documentary history of the American South, the overriding intention and motivation seems far from the documentary cause and tradition. The content of these pictures might have dated but their aesthetic has not. We can still learn from Eggleston, especially when so much photography today seems to be illustrating research.

The Outlands consists of sequences of pictures that seem to be organized in clusters and groupings determined by subject matter or, as the opening series reveals, by the formal strategy adopted: photographs all taken with the camera close to the ground. A family car, a blue Suburban Chevrolet, viewed from low down, provides the iconic and fitting opening picture of Volume One. The photograph was apparently made close to where he made his low-angled picture of the tricycle, which adorned the cover of the book that accompanied Szarkowski’s MoMA show, William Eggleston’s Guide.

Early in The Outlands there is a series of photographs of the fronts and gardens of suburban houses, studies in local variation and styles, wry markers of taste and aspirations. They are not overly standardized homes that are pictured. There is a clear interest in this architectural vernacular and it recurs later in Volume Three, with a few photographs of the front of suburban homes, bathed in golden-light. But in its entirety The Outlands is testimony to something very different to the world of such pictures. Many photographs are drawn to more unkempt and untidy spaces and structures. There are many pictures of local architecture—churches, snack bars, gas stations, roadside stores, barber shops, drive-ins, liquor stores, motels and storefronts.

Many of Eggleston’s pictures reveal a fascination with the pictorial possibilities of words—from faded lettering on walls and shopfronts to the varied typographic forms and styles of newer commercial signage. The standardization of consumer culture does not yet appear to have fully taken over and his pictures appear to relish the signs on many of the more improvized and makeshift structures, the inventive marketing and design ploys adopted by small local businesses and roadside traders. There are a few pictures of consumer goods—the photograph of a bread called Wonder, the last loaf left on the shelf. The bread’s name conjures up something other than the ordinariness of the product and also might be seen to describe Eggleston’s own artistry: his wondrous relation to the quotidian and mundane. While one might see a certain Pop sensibility in some of his photographs, the abiding interest seems to be not with the sheen of signs but their material presence and temporality. There is a memorable photograph, for example, of a visceral slab of steak in an ad that is blistering and decaying.

There seem to be proportionally fewer pictures of people in The Outlands than in those photographs initially chosen and exhibited by Szarkowski. Eggleston makes a tribute to the Delta Blues musician, Fred McDowell, in a picture that draws attention to the colorful attire of Black mourners at his funeral. It is followed by a graceful portrait of a young African American woman in a church interior—this picture also adorns the cover of Volume One of The Outlands. She is photographed as she turns and looks behind her, her left hand on her left shoulder and with her wedding finger raised slightly to show off its distinctive, crescent-shaped ring. The beauty of this portrait jars with the stark and blunt document of poverty on the next page. It is an awkward, discordant but also necessary picture: a bed-ridden mother, beneath a colorful quilt, together with her wide-eyed young child in the interior of a shack. It offers a clear continuity, albeit in color, from the Depression-era photography of the 1930s, a discomfiting reminder that certain realities and inequalities remain.

The last of the three volumes of The Outlands closes with the photograph of a yellow sunset. This is also the final picture in the final volume of all the Steidl publications on his color work. What an ending. It is a cliché, but it teaches us to enjoy sunsets again, bereft of irony. The photograph is the culmination of a series of pictures beginning with stormy grey skies, followed by twilight and end of day photographs. They bring the book to a lively close. We are also taken beyond the cultural, with a final focus upon the sense of nature’s abiding splendor through the drama of its evening skies, though not always pictured separate from views of roads and junctions, cars and parking lots, service stations and motel signs.

The last sunset is preceded by a photograph taken at night in the back of a car, a portrait of a woman wrapped in black fur, seemingly unresponsive to being photographed, asleep perhaps. The car’s green interior and general tone of the picture is tempered by the touch of red made by the Winston cigarette pack in the car door pocket and the warmth of the skin on the side of her face that is visible. With this picture of a figure huddled up in the interior, an intimate and everyday moment is set against the pressing cold and void outside, palpably conveyed through color, the expanse of black that is framed by the car door’s window. Seen in sequence the resplendent sunset that follows and ends the book offers a beautiful and effective counterpoint to that black.

Writing on Knut Hamsun’s novels, Karl Ove Knausgaard refers to their “in-the-midst-of-life modernism.” This description also offers a fitting way of thinking about Eggleston’s lyrical, playful and color-rich responses to the lifeworld—pictures remarkable for their formal brilliance in relation to what was often a rather ordinary and unexceptional real or as with those sunsets, dismissed as cliché.

Editor’s note: Mark Durden would like to thank Peter Finnemore for his incisive thoughts on Eggleston. 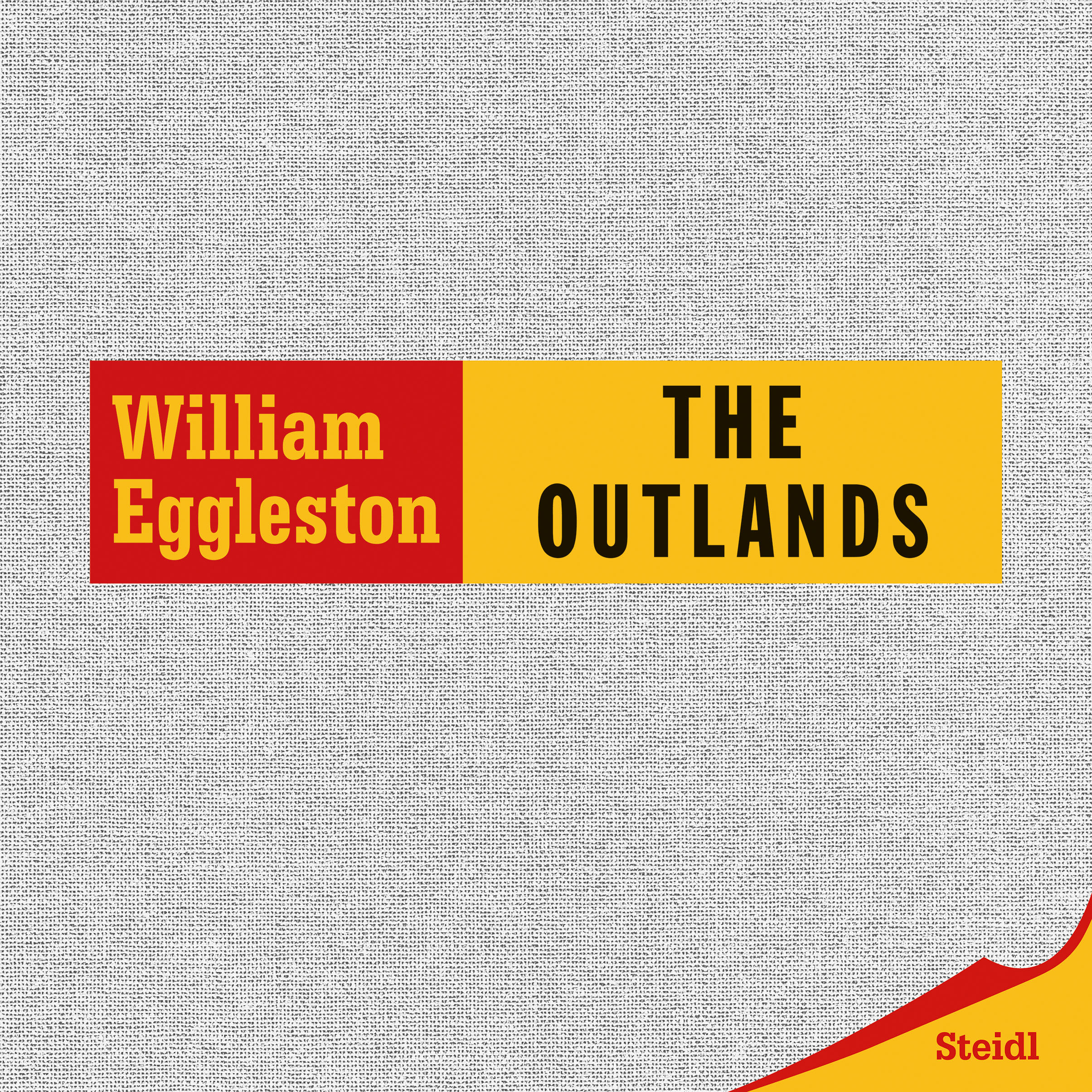