Book review
William Klein’s Brooklyn
Even as he approaches 90 years of age, this groundbreaking, pioneering street photographer continues to create new work that reverberates with life now and into the future. Here’s a review of his latest photobook.
Photographs by William Klein
View Images

William Klein’s Brooklyn
Even as he approaches 90 years of age, this groundbreaking, pioneering street photographer continues to create new work that reverberates with life now and into the future. Here&#8217;s a review of his latest photobook.

Over a long and varied career, William Klein has created eye-catching work across many mediums. But it was through street photography that the world first became acquainted with this multi-talented image-maker. Specifically, through his book on New York, Life is Good and Good for you in New York (1956). The sensational and original vision that Klein offered us then has shaped the photographic image for the last sixty years. Now, Klein returns to his roots with an elegant photobook entitled Brooklyn, shot in the titular borough of his birthplace, New York City.

Since leaving New York as a young man, Klein’s camera (and feet) graced many of the world’s great streets. Between 1957-1960, Klein tackled Moscow, Tokyo, and Rome in a series of powerful, unusual photobooks. He did not try to create meaning out of these foreign places, but rather witness them and allow the viewer, in turn, to witness them uninterpreted. In his artist statement on the Tokyo collection, he wrote, “Everything had to be seen, nothing interpreted: I shall be the barbarian of Tokyo.” Free from overladen historical or social interpretation, Klein’s Tokyo photographs exude gymnastic energy and a stark cinematic beauty. In his photos, he often foregrounds Japanese characters while keeping human subjects at a distance, just out of reach. His compositions echo his artist statement; don’t search to understand, he seems to say.

Today, many decades after his adventures abroad, the now 86-year-old Klein photographed New York City’s most talked-about borough, Brooklyn. His photographs focus on spectacles—street fairs, parades, weddings, and Coney Island in the summer—signaling to us with appealing urgency: “Hey! Something is happening here. Come check it out!” He dives directly into the action, shooting closely cropped images such as one that shows goosebumps on the bare thighs of spectators at an AfroPunk festival. In many of the images, Klein is in the crowd, shooting from slightly below. In 2014, Klein is no longer trying to stylize reality, as in his fashion career, but rather trying to see what is there now—a lucidity that is brave for someone of Klein’s age.

[An hour-long documentary focusing on the “many lives” of this unique figure.]

Of course, we cannot help but wonder whether Klein’s vision is clouded by age. In one shot, he depicts three old men, guardians of the nativity scene in a Christmas street fair, with hard-set eyes as if they’d lost something. Fortunately, the Virgin is safe behind them (decorated by a few flapping dollar bills).

The answer to our doubts appears in the background of his photographs. There, we find something expansive, and true, in his depictions of life. For example, in a photograph of a Hasidic wedding, men dance in a circle and behind them women peek out from the screen that separates the festivities; they are all actors in Klein’s spectacle. Similarly, at a gay pride parade in Tokyo (many years earlier), neighbors gathered on the street behind the protestors to bear witness to the strange sight. Although the protestors are vivid and in our face, the figures in the background also manage to catch our eye.

Brooklyn provides a spectacle less far afield than 1960s Tokyo, but just as strange and enchanting through Klein’s eyes. The scenes of Brooklyn today, like so many other stages of world attention before it, are cluttered and chaotic, grotesque and suggestive, even—in sum, the perfect union of BROOKLYN + KLEIN that the cover of the book announces.

On one of the last pages, Klein is reunited with the ghost of Shinohara, the famous boxer-painter he photographed in Tokyo. Shinohara, the once vibrantly living creative force, has been captured and iconified in a street mural in Brooklyn. While other artists have left behind only their unmoving images—we continue to bear witness as Klein’s long career reverberates with life now and into the future. 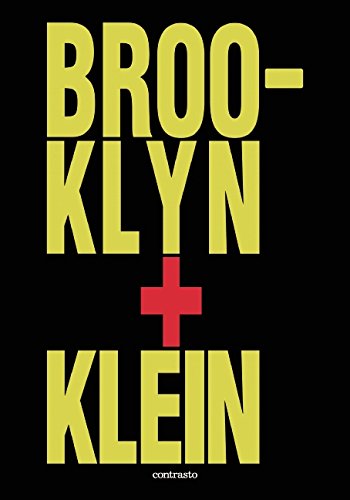 Vera Carothers is a freelance writer and educator based in Paris, France.