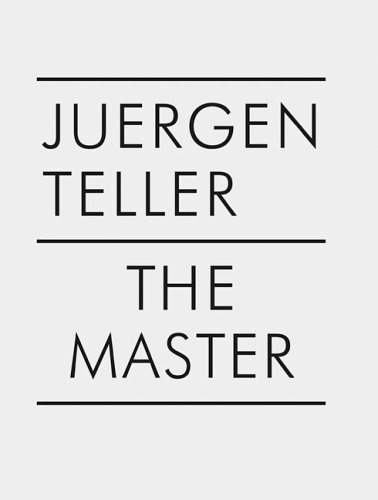 The Master I: Juergen Teller
by Juergen Teller
Publisher's Description
Juergen Teller’s campaigns for Marc Jacobs and Helmut Lang and his fashion editorials for magazines over the last two decades have been credited with changing the face of fashion photography by virtue of their fresh and unmanufactured tone. Teller makes little distinction between his fashion work, commissioned portraits for magazines, and the photographs he takes for himself. All aspects of his work rely on establishing an intimacy between subject and photographer, setting up a nonhierarchical and slightly irreverent relationship, which ultimately gives the viewer the sense of truth revealed.

In recent years, Teller has exhibited a mixture of fashion and commissioned works alongside more personal photographs. The title The Master is a tongue-in-cheek continuation of that exploration, inspired by recent adventures with two of his heroes, the photographers William Eggleston and Nobuyoshi Araki. Portraits of both men were the starting point for the exhibition and this catalogue, which also contains images of other people whose magic fascinates Teller: Marilyn Manson, Kurt Cobain, and Simon McBurney, among others. The selection for The Master also includes theatrical self-portraits from Teller’s Louis XV project with Charlotte Rampling, pictures of noncelebrity subjects, and a number of still lifes from a trip home to Nürnberg. The combination of all these images is a record of energies and residues captured, considered, and, ultimately, lost.
ISBN: 3865211046
Publisher: Steidl
Paperback : 52 pages
Language: English
Dimensions: 6.7 x 8.9 x 0.3 inches