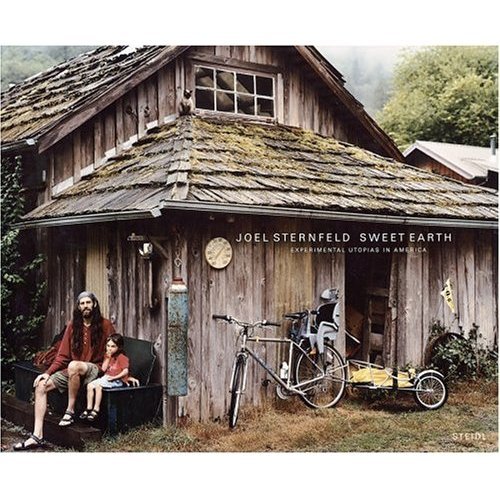 Joel Sternfeld: Sweet Earth- Experimental Utopias in America
by Joel Sternfeld
Publisher's Description
As laissez-faire market forces sweep the globe and the earth’s future seems endangered, the dream of living in concert with nature and with one another is increasingly essential. A common human longing throughout history, the utopian community ideal has taken root firmly in America over the past 200 years. In Sweet Earth: Experimental Utopias in America, Joel Sternfeld looks at 60 representative historic or present American utopias. Neither a conventional history nor a conventional book of photography, Sweet Earth brings together what might otherwise seem disparate, individualized social phenomena and makes visible the community of communities.

This tradition of thinking has ancient, universal precedents. When Thomas More wrote Utopia in 1516, he gave a name to an idea that had included the Epic of Gilgamesh, Plato’s Republic and the Old Testament's and he started an argument. Francis Bacon (who believed in utopia through science) and Jean-Jacques Rousseau (utopia through nature) soon joined the debate, but it was the harsh changes in daily life engendered by the factory systems of the early Industrial Revolution that brought an urgency to the discussion, as seen in the writings of David Owens, Karl Marx, and Friedrich Engels.

While the early social theorists were largely European, it was in the fluid environment of young America that true utopian communities were built and utopian experimentation flourished. In the years between 1810 and 1850, hundreds of secular and religious societies bravely tried to build a 'perfect' life for their members. In the 20th century, experimentation began again, reaching a fever pitch in the turbulent days of the Vietnam War. Some of the late-1960s communes still survive and continue to flourish. The 1990s and the early years of the new millennium have become yet another hotbed of social experimentation. The co-housing movement is sweeping America with at least 70 communities fully completed and occupied and numerous others planned. At the same time, the rapid global expansion of sustainable communities known as ecovillages has been widely adopted in America.

This book by one of America’s foremost artists includes a photograph of each community and is accompanied by brief text that summarizes the most salient aspects of the history or organization. A book that functions both as art, as well as a hopeful guide to alternative ways of life.
ISBN: 3865211240
Publisher: Steidl
Hardcover : 136 pages
Language: English
Dimensions: 13.4 x 10.9 x 0.8 inches