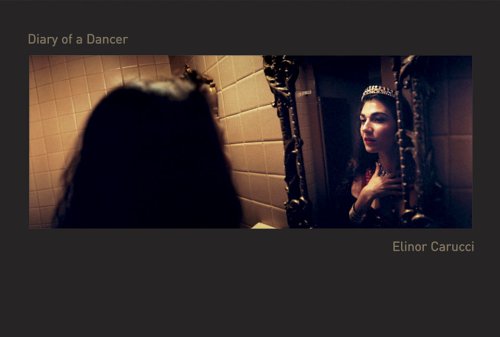 Diary of a Dancer
by Elinor Carucci
Publisher's Description
'I have been a professional Middle Eastern dancer, or as it is called in the West, belly dancer, for ten years. I photographed this collection of images during a period of three years, in which I performed mostly around New York City’s five boroughs, their vicinity, and parts of New Jersey. I traveled to shows with a married couple, Israelis like myself, who were my agents. He was the drummer, she did the jewelry, so we were a small, tightly knit creative team, spending many hours together on the road. We sometimes did as many as six or seven shows an evening, each in a different location and for a different kind of audience. I danced for Americans, Greeks, Indians, Bukharans, Punjabis, Turkish, Chinese, and Gypsy communities. I danced in fancy restaurants for celebrities, in middle-class family events, in sleazy bars, or for men gathered in poor-house basements.

There is a tension between the dance’s beauty, grace and technical sophistication, and the fact that it thrives on its off-stage settings. It is not just choreographically complicated, it is also direct, sexual, warm, alive. More than that, it is, in its own way, truly intimate. It could not be all that if it wasn’t performed in ordinary settings, among, rather than in front of, audiences. This is, in fact, what I personally like so much about it. The mixing with the people, dancing in living rooms, being surrounded by families, grandparents and children at once, the smell of the food and the messiness of real life . . . .' -Elinor Carucci
ISBN: 3865211550
Publisher: Steidl
Hardcover : 96 pages
Language: English
Dimensions: 11.7 x 8 x 0.6 inches