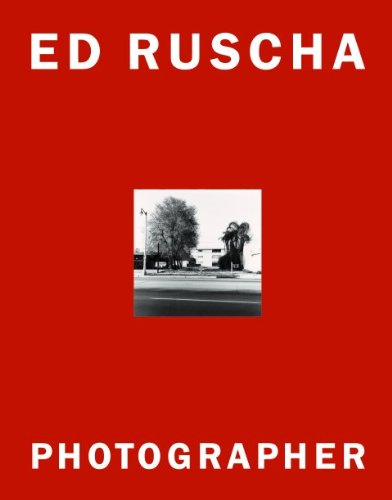 Ed Ruscha - Photographer
by Margit Rowell
Publisher's Description
Ed Ruscha’s relationship to photography is complex and ambivalent. The world-class painter—and author of a 1972 New York Times article called “‘I’m Not Really a Photographer’”—has been known to refer to his work in this second medium as a “hobby,” despite considerable, persistent critical interest. Whether he likes it or not, the small albums of plainly-shot, snapshot-sized images he produced in the 1960s and 70s, including Twenty-Six Gasoline Stations, intrigued his contemporaries and earned him an unshakable reputation. How? His subject matter was neither purely documentary nor solely artistic, in fact it was stereotypical and banal, with motifs drawn from the car-dominated western landscape. That rebellious material, along with his serial presentation, made for a mythical road-movie or photo-novel effect with Beat Generation overtones. The combination attracted artists and critics both, especially while serial logic was prominent in Pop art and Minimalism, and then retained that interest later as serial work became prominent in Conceptual art. Critics have remained attentive for decades, and Ruscha’s influence remains apparent in new work in Europe and North America. Ed Ruscha, Photographer departs from earlier collections to explore how these images—and all of Ruscha’s work in disciplines including painting, drawing, printmaking and photography—are guided and shaped by a single vision.
ISBN: 3865212069
Publisher: Steidl
Hardcover : 184 pages
Language: English
Dimensions: 8 x 10 x 0.8 inches