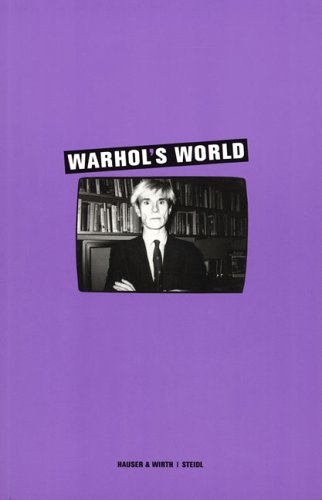 Warhol's World
by Anthony d'Offay
Publisher's Description
The power in Warhol’s portraits stems in part from the depth of his engagement with the society his subjects moved in. Nowhere is this involvement more clearly demonstrated than in his late photography. These previously unpublished images from the Andy Warhol Foundation reveal the reality behind the curtain at Studio 54 and the Factory, and look into the bloodshot eyes of the endless throng of celebrities that came to make up the artist’s social life. If there had remained in Warhol something of the true voyeur, an alternately detached and star-struck watcher, that role largely shifted as he himself became visible in celebrity’s funhouse mirrors, and became a more profoundly involved and then again more fascinated participant; Warhol’s World finds the artist at the far end of that transition, at one with his subjects, all lost to themselves and found by the camera. Warhol’s own position in the New York scene brought him unparalleled access to subjects like Jean-Michel Basquiat, Mick Jagger, Debbie Harry, Diana Ross, Robert Rauschenberg, Jerry Hall, Bianca Jagger, Grace Jones, Demi Moore, David Hockney, Kenny Scharf, Diana Vreeland, Paloma Picasso and Ozzy Ozbourne, and this extensive book establishes—if there was any doubt—that Warhol cared deeply about human society, human interaction, and human frailty, and took intense joy in documenting them in the microcosm that was his Village.
ISBN: 3865212417
Publisher: Steidl
Paperback : 224 pages
Language: English
Dimensions: 6.8 x 7.7 x 1.5 inches