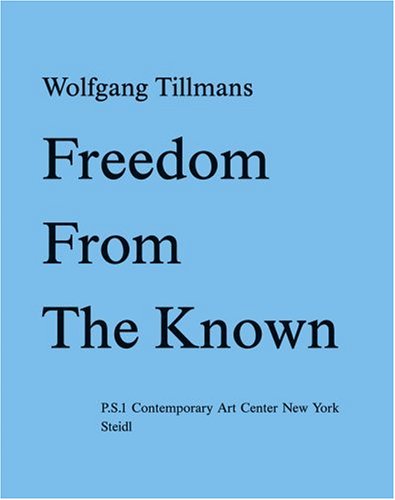 Wolfgang Tillmans: Freedom from Known
by Wolfgang Tillmans
Publisher's Description
Freedom From The Known is the first book to focus entirely on Tillmans’s abstract photographs, exploring the presence abstraction has had within his figurative and representational work. It is published on the occasion of the artist’s first major solo exhibition for an American museum—curated by Bob Nickas, who contributes an essay here—which opened at P.S.1 in Long Island City, New York, in the spring of 2006. Of the 25 pieces here, 24 were produced specifically for this project, and had never been seen before the exhibition. Most are “cameraless”pictures, made by the direct manipulation of light on paper, rather than on a negative. Also included are a group of figurative photographs from the 1990s series Empire, which made the shift from figure to abstraction by being passed through a photocopy or fax machine, then scanned to the highest possible resolution, turned into large-scale C-prints and framed. A selection of earlier photographs provides a context for Tillmans’s passage from figurative and representational imagery to abstraction. Taken together, these more conceptual works reveal the self-reflective impulse underpinning choices of media and topic throughout his work.
ISBN: 3865212638
Publisher: Steidl/P.S.1 Contemporary Art Center, New York
Hardcover : 80 pages
Language: English
Dimensions: 8.9 x 10.8 x 0 inches