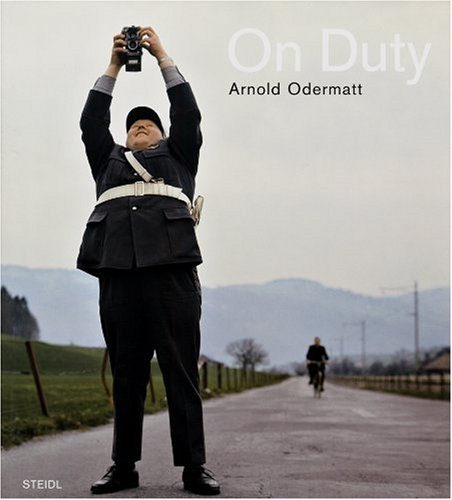 On Duty
by Arnold Odermatt
Publisher's Description
Arnold Odermatt joined the police force in his native Swiss canton of Nidwalden in 1948, when he was just in his twenties. When he retired more than 40 years later as Vice Commander of the department and Lieutenant Director of Traffic Police, he found sudden, unexpected fame as an artist. His photographs of the vehicle accidents that had been part of his professional life, collected in the book Karambolage, led to international recognition: his work was shown at the 2001 Armory Fair and Venice Biennale, followed by solo exhibitions at the Art Institute of Chicago in 2002 and at the Fotomuseum Winterthur in 2004.

In addition to his car crash photographs, Odermatt has also used his camera to recreate scenes from his days in law enforcement, spurred on by the fears of the shrinking Nidwalden police force, in hopes of enticing the village youth to join its increasingly unfashionable ranks. On Duty collects these images, which are populated by Odermatt’s colleagues reenacting their daily adventures, in a compelling sequence of colorful tableaux. It is a strange and impressive document offering unexpected insight into a hidden world.
ISBN: 3865212719
Publisher: Steidl
Hardcover : 336 pages
Language: English
Dimensions: 0 x 0 x 0 inches