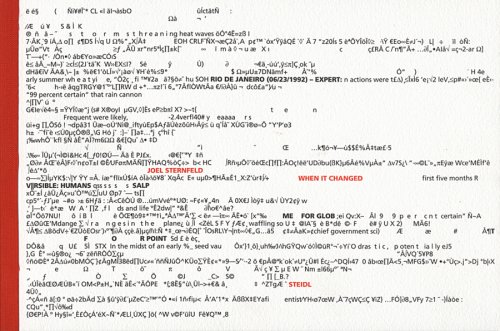 When It Changed
by Joel Sternfeld
Publisher's Description
Of the impetus to create the photographs in When it Changed, Joel Sternfeld writes,“Future generations are going to wonder about us, the inhabitants of the Earth when the climate began to change.”These 55 portraits document attendees at the eleventh United Nations conference on climate change held in Montreal in 2005, each accompanied by the subject’s statements about the evidence of shifts in his or her home country’s weather and wildlife. A detailed chronology of what has been termed “humanity’s greatest challenge” offers an efficient means to grasp the scientific and governmental response to global warming, as well as its projected consequences. The testimony here is dark, but Sternfeld’s title When it Changed may also refer to a more hopeful scenario: At the Montreal conference, the United States worked, as it had for years, to undermine discussions about the Kyoto Protocol. Leading newspapers predicted the end of international effort to mitigate climate change. But one night, after the U.S. delegation had walked out of a late meeting, the nations of the world joined together without them and agreed to take a step forward. In his testimony, Mohammad Reazuddin, the delegate from Bangladesh, says,“My voice may be small because I am from a small country. But those who will be washed away, their voices must be heard.”
ISBN: 3865212786
Publisher: Steidl
Paperback : 170 pages
Language: English
Dimensions: 5.9 x 8.7 x 0.5 inches