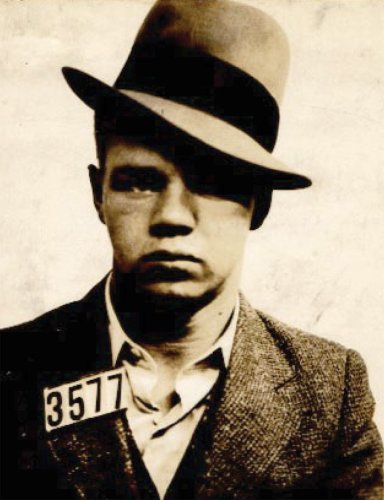 LEAST WANTED
by Mark Michaelson
Publisher's Description
Punks, sneaks, mooks and miscreants. Hookers, stooges, grifters and goons. Men and women, elderly and adolescent, rich and poor, but mostly poor. These are the Least Wanted. Their portraits make up a small part of Mark Michaelson’s collection of over 10,000 American mugshots from the 1870s to the 1960s. Created as utilitarian instruments, and meant to be destroyed when obsolete, they survive as remnants of a bygone era of hard-copy originals, extraordinary visual windows on the past, and extraordinary physical artifacts, often accompanied by municipal ephemera. They are glued to cards and manuscripts, typed on and rubber stamped. Each suspect has been measured and fingerprinted, documented and classified. Bored, sheepish, proud, coy, tough, defiant, bounced, bloodied, bruised, broken and innocent faces—innocent until proven guilty—stare back at the camera with unmistakable individuality. This is central casting for the Late Late Show of unvarnished reality, and the lineup is full of small-timers, those who have fallen through the cracks. Each subject, each image, is a person, a portrait, a trace, a crime, a clue, a moment, an expression, a frame, a mustache, a mother, a father, a son or a daughter. Each image is evidence, documentation. A record of people and of stories dismissed by history and rescued here. A century of American souls, filed and forgotten, until now. Contributors include Ian McEwan and New Yorker contributor Malcolm Gladwell.
ISBN: 3865212913
Publisher: Steidl
Hardcover : 304 pages
Language: English
Dimensions: 8.7 x 11.1 x 1.2 inches