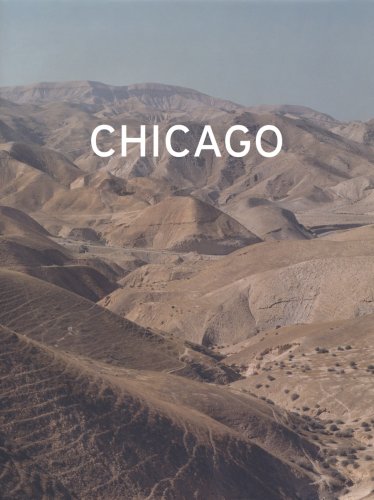 Chicago
by Adam Broomberg
Publisher's Description
Chicago is a fake Arab town built by the Israeli Defense Force for urban combat training. It is a place that is familiar to Israeli and American soldiers, but until now largely unknown outside Israel. Chicago stands in the middle of the Negev desert, a ghost town whose history directly mirrors the story of the conflict with Palestine. During the first Gulf War, American Special Forces had their first taste of the Middle East here.“Rehearsals” included a failed attempt to assassinate Saddam Hussein, the Battle of Fallujah, and, most recently, the evacuation of the Gaza settlements.

Complete with homes, shops, streets, mosques and a refugee camp, Chicago represents an Israeli military fantasy: an Arab town devoid of people. It is a fantasy that was at the heart of early Zionist propaganda, expressed in the famous slogan “A Land without people for a people without land.” In an attempt to scrutinize this and other myths about the state of Israel, acclaimed photographers Adam Broomberg and Oliver Chanarin have produced a highly original visual analysis of contemporary Israel. In their images, nothing is as it seems. A watermelon is revealed to be a suicide bomb; a forest is actually a forensic investigation. Through this collection of simulated landscapes, buildings and objects, a new perspective on Israel begins to emerge.
ISBN: 3865213073
Publisher: Steidl
Hardcover : 112 pages
Language: English
Dimensions: 10 x 13 x 0.8 inches