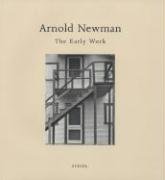 The Early Work
by Arnold Newman
Publisher's Description
When celebrated photographer Arnold Newman began his career in 1938 in chain portrait studios in Philadelphia, Baltimore and West Palm Beach, he also immediately began to make abstract and documentary photography on his own, studying people and places impoverished by the Depression. In June of 1941, Beaumont Newhall of The Museum of Modern Art, New York, and Alfred Stieglitz 'discovered' him, and he was given an exhibit with Ben Rose at the A.D. Gallery that September. There Newman began to combine his independent work with the portraiture that had been his bread-and-butter, developing the approach for which he is best known, which came to be called 'environmental portraiture,' and which is so widely influential today that it might be the new standard practice. This style made Newman a distinctive contributor to publications like Life, Vanity Fair, and the New York Times Magazine, brought him into the collections of museums around the world, including The Museum of Modern Art, The Metropolitan Museum of Art, and the International Center of Photography in New York, and led to his recognition in photography histories and with awards including France's Commander of the Order of Arts and Letters. The photographs collected here were made before Newman achieved recognition as a pioneering portraitist, during the formative years from 1938 to 1942. They highlight the early stirrings of a great photographic master.
ISBN: 3865213618
Publisher: Steidl
Hardcover : 232 pages
Language: English
Dimensions: 11.7 x 12.3 x 1.2 inches