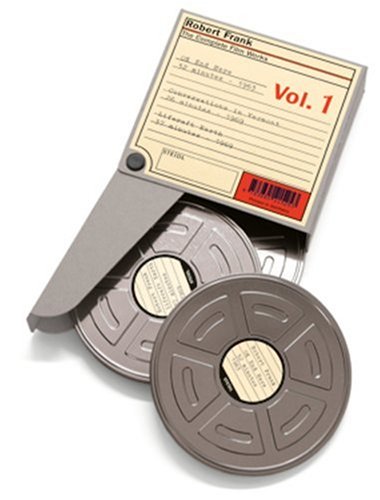 Robert Frank : The Complete Film Works Vol. 1
by Robert Frank
Publisher's Description
The significance of Robert Frank's photography is unquestionable. His The Americans is arguably the most important American photography publication of the postwar period, and his work has spawned numerous disciples, as well as a rich critical literature. However, it is also true that at the very moment he became a star-the end of the 1950s-Frank chose to abandon still photography for more than 10 years in order to entrench himself in filmmaking. Steidl's long-overdue DVD compilation of the Complete Film Works provides a comprehensive overview of more than 25 films and videos, some of them classics of the New American Cinema of the 1950s and 1960s. Volume I features a booklet with several in-depth essays and new stills taken from the original films and videos, as well as a DVD containing Me and My Brother, Frank's first feature-length work; The Sin of Jesus, based on a story by Isaac Babel and with music by Morton Feldman; and the seminal Pull My Daisy, a 1959 short film co-directed by Alfred Leslie, starring Allen Ginsberg, Gregory Corso, Larry Rivers, Peter Orlovsky, David Amram, Richard Bellamy, Alice Neel, Sally Gross and Frank's then-infant son, and narrated by Jack Kerouac. One of the most important experimental films of the twentieth century, Pull My Daisy, has been deemed 'culturally significant' by the Library of Congress and selected for preservation in the National Film Registry.
ISBN: 3865213650
Publisher: Steidl
DVD-ROM : 64 pages
Language: English
Dimensions: 5.2 x 7.4 x 0 inches