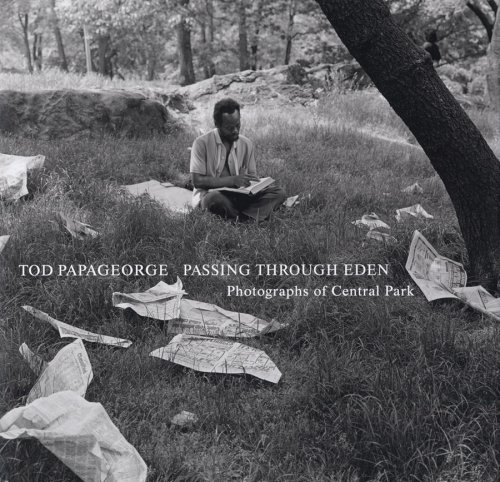 Passing Through Eden: Photographs of Central Park
by Tod Papageorge
Publisher's Description
Tod Papageorge moved from Leicas to medium-format cameras when he lived in New York in the 1970s, and a few years later began to photograph in Central Park in earnest. These pictures, gathered in Passing Through Eden, convey the passion that Rosalind Krauss once described in Papageorge's work-embracing 'the sensuous richness of physical reality that fullness which Baudelaire used to call intimacy, when he meant eroticism.' From picture to picture, Papageorge constructs a world that resembles our own, but that also reminds us of Biblical paradise: Passing Through Eden is edited to parallel, in its first half, the opening chapters of Genesis-from the creation through the (metaphorical) generations that follow on from Cain-before giving over to a virtuosic run of pictures that, from one to the next, might invoke Shakespeare's Tempest, or just confirm that the human comedy is alive and well in Central Park. This ambitious portfolio-incorporating work made over the course of 25 years-shows off not only Papageorge's remarkable ability to make photographs that read like condensed narratives, but also his skill at weaving them into sequences that echo shared cultural narratives. It challenges the reader to succumb (or not) to the pleasures of the 'fullness' of each individual photograph, while ignoring (or not) the tug of a tale asking to be told. Like Eden itself, this book sets our hunger for beauty against that of knowledge, while reminding us of some of the ways that we read, and come to know, books.
ISBN: 386521374X
Publisher: Steidl
Hardcover : 176 pages
Language: English
Dimensions: 12.1 x 11.5 x 0.9 inches