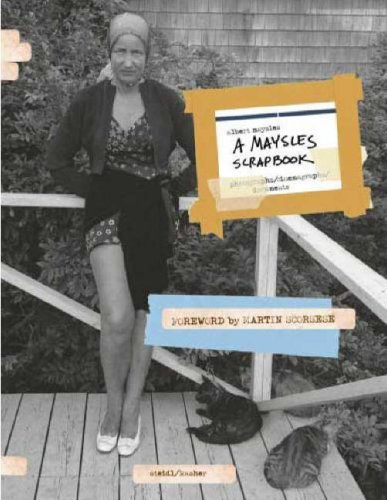 A MAYSLES SCRAPBOOK: Photographs / Cinemagraphs / Documents
by Steven Kasher
Publisher's Description
A Maysles Scrapbook: Photographs/Cinemagraphs/Documents is the first comprehensive monograph on the pioneer filmmaking team that set the standards of contemporary documentary filmmaking: their Grey Gardens (1976) has spawned several fashion collections, an award-winning Broadway musical and a soon-to-be-released feature film starring Drew Barrymore and Jessica Lange; Gimme Shelter (1970), which captured the infamous and fatal Rolling Stones concert at Altamont, is often called the greatest documentary ever made on the American 1960s; and Salesman (1968) is widely credited as the first feature-length documentary to eliminate voice-over narration and the first to achieve wide theatrical distribution. With David on sound and Albert behind the camera, the Maysles were absolutely pivotal in creating the Cinema Verité, or Direct Cinema, movement of the 1950s and 60s, and, along with Frederick Wiseman, Richard Leacock, D.A. Pennebaker and Robert Drew, are among the progenitors of modern documentary cinema. The recent discovery of a cache of original film negatives, plus hours of outtake film, numerous stills, production notes and personal and business letters is the occasion for this retrospective publication and exhibition. Using the latest digital technology to scan and print from original footage, images from both major and lesser-known films are reproduced, alongside significant writings by Albert and others (many published for the first time). With further contributions from admirers and collaborators including Pennebaker, Leacock, Elliot Erwitt, Bruce Davidson and Norman Mailer, and an introduction by Martin Scorsese, this volume is a long-awaited testament to one of the most important and influential filmmaking teams of our time.
ISBN: 3865214967
Publisher: Steidl
Hardcover : 240 pages
Language: English
Dimensions: 8.7 x 10.8 x 1.3 inches