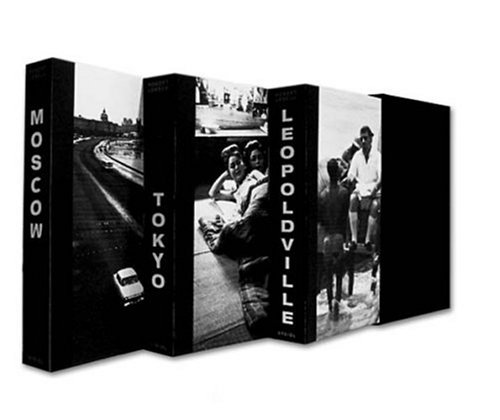 TOKYO, MOSCOW, LOEPOLDVILLE (Bk. 1)
by Robert Lebeck
Publisher's Description
Photographer Robert Lebeck was interested not only in 'the event' in and of itself, but also in the stories on the fringes and the people behind the images. Lebeck was frequently to be found in that elusive terrain most photographers dream of: the right place at the right time. When he took the photo 'Rapier Thief' on his tour of Africa in 1960, for instance, he captured a symbolic portrait of the end of European colonial power-an image which has since become a classic of press photography. His photographs of Japan contrast the wealth of a few with the poverty of many. And when he photographed in the Soviet Union in 1962, he demonstrated a rare understanding of its culture. This handsomely slipcased three-volume monograph gathers images from Moscow, Tokyo and Leopoldville (current-day Kinshasa). These pictures of Africa, Asia and the Soviet Union, mostly made in the early 1960s, show a world in upheaval, a world in which extremes were colliding. Furthermore, they suggests that there is much more to be considered than that which is presented in the photographic image.
ISBN: 3865215270
Publisher: Steidl
Paperback : 580 pages
Language: English
Dimensions: 8.3 x 11.3 x 2.2 inches