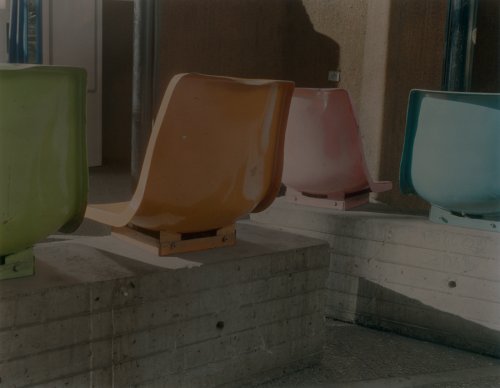 CDG/JHE
by Greger Nilson
Publisher's Description
Recent world events have dramatically altered the cultural identity of airports. Where once they connoted excitement—the prospect of flight, remote destinations, encounters— today airports are loaded with very different associations and anticipations. Armed police officers, safety regulations and restrictions only heighten our feelings of insecurity. Roissy Charles de Gaulle Airport has always been a special place for the Swedish photographer J.H. Engström. At the age of 10, he moved to Paris with his parents, and Charles de Gaulle was his first contact with a world beyond his native Sweden. The relocation created an intense relationship to the city of Paris, as well as to the Charles de Gaulle and airports in general. For the project CDG/JHE, Engström spent three weeks isolated in an airport hotel, photographing in and between the terminals. The airport became a place to observe public behavioral habits at a crucial juncture in its brief history.
ISBN: 3865215386
Publisher: Steidl
Hardcover : 112 pages
Language: English
Dimensions: 11.7 x 9.1 x 0.7 inches