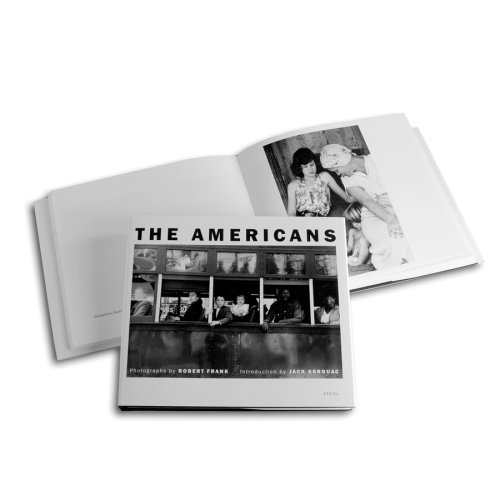 The Americans
by Robert Frank
Publisher's Description
On May 15, 1958, the first edition of Robert Frank’s The Americans was published in Paris. Les Américains was part of a series of books which presented foreign countries through words and pictures. It contained Frank’s 83 photographs in the same sequence as all subsequent editions, with the image on the right hand page juxtaposed with texts from American social and political history, gathered by Alain Bosquet. The following year in the first American edition, the French texts were removed and an introduction by Jack Kerouac was added. Over the subsequent 50 years, The Americans has been republished in many editions, in numerous languages, with a variety of cover designs and even in a range of sizes. It is the most famous photobook ever published, and it changed the face of the medium forever.

Robert Frank discussed with his publisher, Gerhard Steidl, the idea of producing a new version using modern scanning and the finest tritone printing. The starting point was to bring the original prints to Göttingen, Germany, where Steidl is based, from New York.

In July, 2007, Frank visited Göttingen. A new format for the book was worked out and new typography selected. A new cover was designed and Frank personally chose the book cloth, foil for embossing and the endpaper. Most significantly, in the process of working out the layout of the photographs on the page, Frank chose to reproduce un-cropped examples of the photographs when available. Two images were changed completely from the original 1958 and 1959 editions. Then, on a sunny day in July of 2007, the presses started rolling and Robert Frank personally supervised the printing of this latest edition of The Americans.

Amazon.com Review
Armed with a camera and a fresh cache of film and bankrolled by a Guggenheim Foundation grant, Robert Frank crisscrossed the United States during 1955 and 1956. The photographs he brought back form a portrait of the country at the time and hint at its future. He saw the hope of the future in the faces of a couple at city hall in Reno, Nevada, and the despair of the present in a grimy roofscape. He saw the roiling racial tension, glamour, and beauty, and, perhaps because Frank himself was on the road, he was particularly attuned to Americans' love for cars. Funeral-goers lean against a shiny sedan, lovers kiss on a beach blanket in front of their parked car, young boys perch in the back seat at a drive-in movie. A sports car under a drop cloth is framed by two California palm trees; on the next page, a blanket is draped over a car accident victim's body in Arizona.

Robert Frank's Americans reappear 40 years after they were initially published in this exquisite volume by Scalo. Each photograph (there are more than 80 of them) stands alone on a page, while the caption information is included at the back of the book, allowing viewers an unfettered look at the images. Jack Kerouac's original introduction, commissioned when the photographer showed the writer his work while sitting on a sidewalk one night outside of a party, provides the only accompanying text. Kerouac's words add narrative dimension to Frank's imagery while in turn the photographs themselves perfectly illustrate the writer's own work.