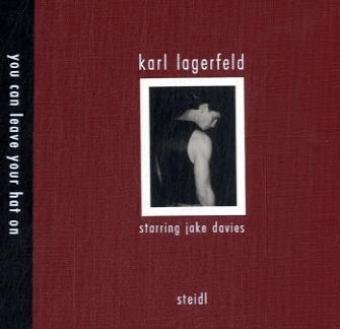 Karl Lagerfeld: You Can Leave Your Hat On
by Karl Lagerfeld
Publisher's Description
This book presents a selection of Karl Lagerfeld’s photographs of the model Jake Davies in different locations, settings and moods but all with one wry thing in common: Davies is wearing a hat. Lagerfeld’s project is the evocation of various personae acted out by Davies, not simply the photographic profile of a youth in changing guises. Indeed the book’s title page states that it “stars” Davies, casting him as the lead in an ambiguous drama. Compact in format, You Can Leave Your Hat On contains sepia photographs symmetrically framed by large white margins as if pasted into an album, like photographic ideas or filmic fragments. In one scene Davies appears gangster-like in a high-collared shirt, tie and pinstriped coat, seated pensively at an outdoor café. In another he stands poolside at night in a tuxedo, as if having just stepped out of a glittering party whose guests cannot be seen. Other images incorporate portraiture and fashion photography: for example Davies nude, gazing out a window or seated in jeans and a casual shirt in a studio. Throughout these scenarios, Lagerfeld employs Davies’ hat not only as a playful detail, but also as a dramatic beacon, linking the episodes into a larger story whose plot we ourselves must imagine.
ISBN: 3865215904
Publisher: Steidl
Hardcover : 88 pages
Language: English
Dimensions: 0 x 0 x 0 inches