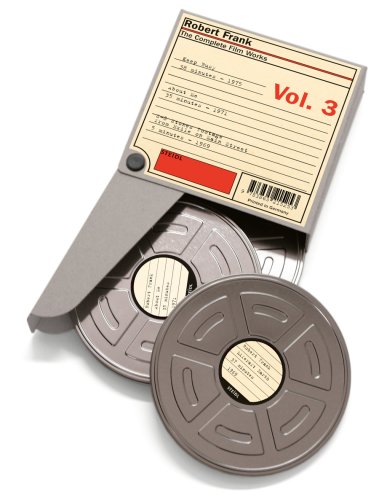 Robert Frank: The Complete Film Works: Vol. 3
by Robert Frank
Publisher's Description
Robert Frank, born in Zurich in 1924, has made, in his 50-year career, an unquestionably significant contribution to photography. His seminal book The Americans is arguably the most important American photography publication of the postwar period. His work continues to influence photographers and has spawned a rich body of theoretical writing. Yet at the very moment Frank became an art-world star at the end of the 1950s, he abandoned still photography to become a filmmaker. Though he did return to photography in the 1970s, Frank the filmmaker has remained a well-kept secret for almost four decades. A compilation examining his missing years is long overdue. Robert Frank: The Complete Film Works details each one of Frank's more than 25 films and videos-many of them classics of 1950s and 60s New American Cinema. Volume 3 of the set, this beautifully packaged publication, features three DVDs-which include Keep Busy (1975), About Me: A Musical (1971) and S-8 Stones Footage from Exile on Main Street (1972)-in a film-roll-box slipcase.
ISBN: 3865215912
Publisher: Steidl/The Robert Frank Project
DVD Language: English
Dimensions: 5.3 x 7.3 x 1.6 inches