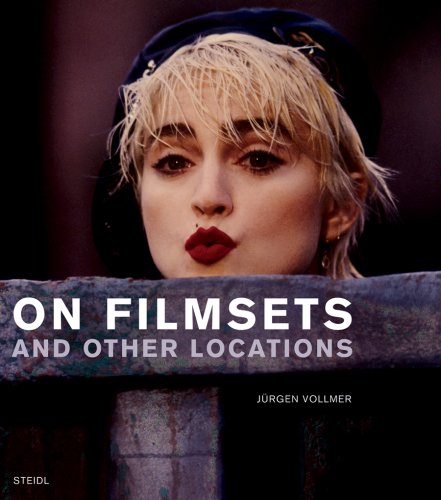 On Filmsets and Other Locations
by Jurden Vollmer
Publisher's Description
At once a travelogue and a celebrity portrait collection, On Filmsets compiles Jürgen Vollmer’s photographs of film sets and celebrities all over the world. Vollmer, famed for his pictures of The Beatles (and for inventing the famous Beatles mop-top haircut), has a gift for putting his subjects at ease. In these pages he offers classical, relaxed portraits of Brad Pitt, Johnny Depp, Sean Connery, Heath Ledger, Madonna (Vollmer took the famous Madonna shot for Who’s That Girl, with the young Ms. Ciccone peeping over a wall), Arnold Schwarzenegger, Catherine Deneuve, Isabelle Huppert and Jeanne Moreau. Many of these portraits date from the 1980s, when Vollmer was a still photographer in Hollywood. His portraits of directors include, among others, Francis Ford Coppola, Tony Scott, Roman Polanski, Barbara Streisand and Alain Resnais, alongside over 170 images taken on numerous American and French film sets over the past four decades. Also featured are Vollmer’s long esteemed photos of Rudolf Nureyev, taken in 1966 during rehearsals for the ballet Le Jeune Homme et la Mort and reckoned by many to be the finest images of the great dancer. The second part of this book,“Other Locations,” comprises portraits taken between 1961 and 1996 in various parts of the world: Turkey, Sicily, Egypt and Senegal.“I began to see the significance of many of my photos only decades after they were taken,”Vollmer confesses.“At the time I took them I just followed my instincts.”
ISBN: 386521598X
Publisher: Steidl
Hardcover : 237 pages
Language: English
Dimensions: 9.8 x 10.9 x 0.6 inches