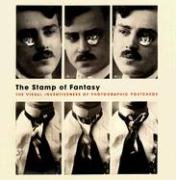 The Stamp of Fantasy
by Urs Stahel
Publisher's Description
Essential for ephemera aficionados, fans of Surrealism and proto-Surrealism and for anyone prone to spending more time in a museum’s shop than in its galleries, The Stamp of Fantasy vindicates the postcard as a medium with a history as rich as the mediums it helped to foster, such as photomontage and mail art. In presenting the most fantastical postcard images from the early twentieth century, this book may be the opposite and complement to Martin Parr’s famous Boring Postcards series, stuffed as it is with disembodied heads, hybrid humans, erotic imagery and drawn modification. If the great French filmmaker Georges Méliès had produced postcards (instead of films on a postcard scale), they might resemble these miniature works by diverse hands, selected from the esteemed collections of Peter Weiss and Gérard Lévy for the touring exhibition of the same name. The book tracks the overlap between so-called “fantasy” postcards and the avant-garde art of the 1920s and 1930s, principally Dadaism and Surrealism. Paul Eluard, André Breton and Salvador Dalí were enthusiastic collectors of fantasy postcards and Hannah Höch, Herbert Bayer, Man Ray and many others used them as material in their work. Marcel Duchamp’s famed 1919 détournement of a 'Mona Lisa' postcard, “L.H.O.O.Q,” may be one of this book’s guiding precedents, at least for drawing attention to the postcard per se-but plenty of anonymous artists contribute equally irreverent and inventive tweakings, as well as more hallucinatory amendments. The Stamp of Fantasy is a wonderful celebration of the small gesture, amateur inventiveness, folk Surrealism and art’s most democratic form of reproduction.
ISBN: 3865216080
Publisher: Steidl
Hardcover : 216 pages
Language: English
Dimensions: 11.8 x 11.6 x 1.1 inches