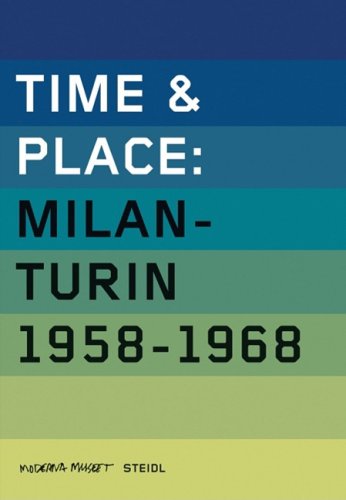 Time & Place, Volume 2: Milano-Turino 1958-1968
by Luca Massimo Barbero
Publisher's Description
The experimental character of Stockholm's renowned Modern art museum, the Moderna Museet, was formed in the late 1950s and early 60s, with influences coming primarily from Paris and New York. To mark the museum's fiftieth anniversary this year, three exhibitions focus on other creative hubs-Rio, Milan-Turin and Los Angeles-during that exciting period. Three volumes, available singly or in a 3-volume, slipcased edition, are definitive resources on this trio of cultural centers that don't often get center stage. In the 1950s, Rio expanded into a metropolis of nearly 2.5 million inhabitants. The word of the moment was new: Neoconcretism in art, Bossa Nova in music and Cinema Novo in film. The first volume of this set explores this theme, with work by Lygia Clark, H?lio Oiticica and Lygia Pape among others. This second volume of the edition explores the influential Northern Italian art scene between 1958 and 1968. Highlights include a history of Arte Povera and an introduction to film and design trends of the time. Artists like Lucio Fontana, Piero Manzoni and Michelangelo Pistoletto are surveyed in detail. The third volume of the Place & Time series highlights the interplay of utopia and dystopia-sunshine and noir-that characterized Los Angeles in the postwar era, and which has since vitally impacted contemporary art. Works by Ed Ruscha, David Hockney, Ed Kienholz, Sam Francis and James Turrell, among others, form the core of the volume, and the diversity of artistic practices explored here reveal similar influences, but a variety of media and methodologies. Also included are key illustrations of how the era was defined in all areas of culture: for example Arts & Architecture magazine's experimental program for residential architecture, the Case Study Houses-an example of the utopian side of the California scene at that time-which aimed to create well-designed and inexpensive housing for soldiers returning from World War II.
ISBN: 3865216390
Publisher: Steidl/Swedish Books/Moderna Museet
Paperback : 112 pages
Language: English
Dimensions: 6.7 x 9 x 0.6 inches