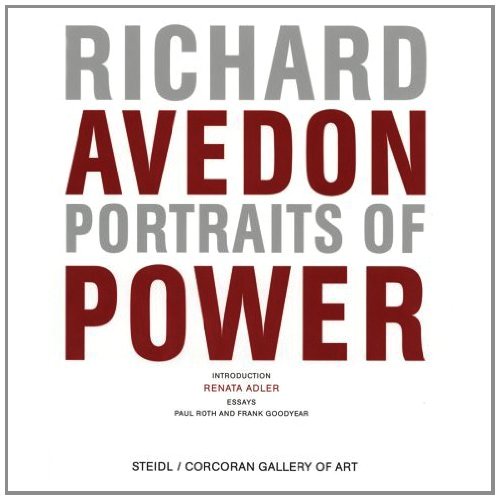 RICHARD AVEDON: PORTRAITS OF POWER
by PAUL ROTH
Publisher's Description
Richard Avedon, America's preeminent portraitist and fashion photographer, photographed the many faces of politics throughout his career. Portraits of Power brings together Avedon's political portraits for the first time. Juxtaposing images of elite government, media and labor officials with counter-cultural activists, writers and artists, as well as ordinary citizens caught up in national debates, it offers a five-decade taxonomy of politics and power by one of America's best-known artists. The book features several of Avedon's extended projects addressing these themes, including coverage of the civil rights debate in the early 1960s (published in 1964 in Nothing Personal); the American anti-war movement and the war in Vietnam from 1969-1971; portraits of the American power elite in 1976, produced for his groundbreaking Rolling Stone portfolio 'The Family;' 'Exiles: The Kennedy Court at the End of the American Century,' a retrospective homage to the Camelot generation published in the New Yorker in 1993; and his final photo-essay, 'Democracy,' surveying the national mood during the politically fractious period prior to the 2004 presidential elections (published posthumously in the New Yorker in 2004). Richard Avedon (1923-2004) was the most successful fashion photographer and portraitist in America throughout a six-decade career. Serving in the Merchant Marines during World War II, Avedon was assigned to the photography unit and learned his trade making identification portraits. After the war, he found work as a photographer for Harper's Bazaar and Theater Arts and began a fruitful apprenticeship with legendary editor, designer and artist Alexey Brodovitch. Avedon invigorated the staid fashion photography of the time, staging fictional tableaux and developing an unprecedented theatrical style. Moving to Vogue in 1966 and the New Yorker in 1993, Avedon continued to innovate. Extraordinarily prolific throughout his career, he produced many books, among them Nothing Personal (1964), An Autobiography (1993) and The Sixties (1999).
ISBN: 3865216757
Publisher: Steidl
Hardcover : 300 pages
Language: English
Dimensions: 10 x 11.9 x 0 inches