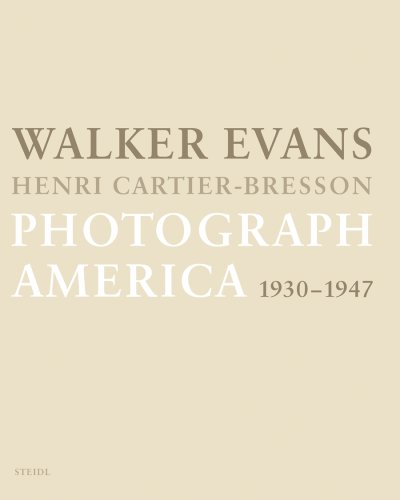 Walker Evans & Henri Cartier-Bresson: Photograph America
by Agnes Sire
Publisher's Description
Walker Evans and Henri Cartier-Bresson belonged to the same generation and shared an insatiable intellectual curiosity. Their photographs were exhibited together in 1935 at the Julien Levy Gallery in New York, and for 18 brief months—between 1946 and 1947—they were both working in the U.S. while Cartier-Bresson was preparing his show at The Museum of Modern Art. At the time, Evans had already published Let Us Now Praise Famous Men with James Agee (1941) and was at work on Many Are Called, the first edition of which was published in 1966. Cartier-Bresson, on the other hand, was making a fresh start, leaving behind his work in film to pursue a career as a stills photographer. Although both men approached photography as a task of social criticism, their practices were always quite distinct: Evans kept a visible critical distance from his subject, while Cartier-Bresson, who was exploring a territory that was still new to him, tended to address individual dynamism. Marking the centenary of Cartier-Bresson’s birth, Photograph America compares Evans and Cartier-Bresson’s work on America in the period from 1930 to 1947. It presents an opportunity to confront and compare the visions of both of these seminal photographic masters at once.
ISBN: 3865216803
Publisher: Steidl & Partners
Hardcover : 160 pages
Language: English