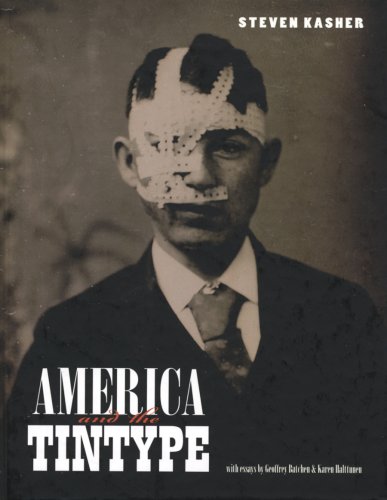 America and the Tintype
by Geoffrey Batchen
Publisher's Description
One of the most intriguing and little studied forms of nineteenth-century photography is the tintype. Introduced in 1856 as a low-cost alternative to the daguerreotype and the albumen print, the tintype was widely marketed from the 1860s through the first decades of the twentieth century as the most popular photographic medium. The picture-making preference of the people, it was almost never used for celebrity portraiture: It was affordable, portable, unique and available almost everywhere. Because of its ubiquity, the tintype provides a startlingly candid record of the political upheavals that rocked the four decades following the American Civil War and the personal anxieties they induced. As this book's author, Steven Kasher, argues, the tintype studio became a kind of performance space in which sitters could act out their personal identities. Sitters brought to the tintype studio not just their family and friends but also the tools of their trade, costumes, toys, stuffed animals and other such props. Often they would enact stereotypes and fantasies that reflected or challenged conventional gender, race and class roles. Surprisingly, the tintype was almost exclusively an American phenomenon, rarely used in other countries, and this book demonstrates how this modest form of photography provides extraordinary insight into the development of national attitudes and characteristics in the formative years of the early Modern era. Featured in this book are more than 200 remarkable examples of tintypes, mostly drawn from the Permanent Collection of the International Center of Photography in New York.
ISBN: 3865216862
Publisher: Steidl
Hardcover : 272 pages
Language: English
Dimensions: 8.1 x 10 x 1.2 inches