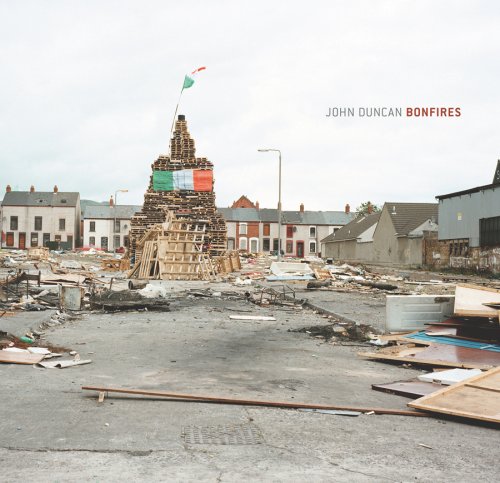 Bonfires
by Colin Graham
Publisher's Description
John Duncan’s Bonfires documents a long-standing tradition of bonfire building by Protestant communities in Belfast, Northern Ireland. The bonfires are built in preparation for annual 12th July celebrations, which commemorate the defeat of James Stuart at the Battle of the Boyne in 1690. The imposing bonfire structures are a powerful provocation with which Protestant identity is asserted and a sense of solidarity and continuity is re-affirmed.

Duncan’s photographs frame and measure the structures against their various social settings, revealing both a sense of Belfast’s changing urban landscape and the deep divisions that, despite political progress, still affect Northern Ireland long after the ceasefires. The bonfires have recently been challenged from a number of quarters: from within the Protestant community for damage caused to property and surrounding areas; from developers who covet the waste land they are built on; and from environmentalists who express concerns about the pollution they cause. Seen against this backdrop of competing agendas, the bonfires come to express a form of resistance, and their building a kind of raw ingenuity.

Duncan’s work dwells on the fact that each bonfire has a singular structure, an identity. They are sculptural and architectural oddities with many resonances through history and art, from high-rise flats to military watchtowers and gun emplacements, from the Empire State Building to the Tower of Babel.
ISBN: 3865217265
Publisher: Steidl
Hardcover : 72 pages
Language: English
Dimensions: 11.5 x 10.7 x 0.6 inches