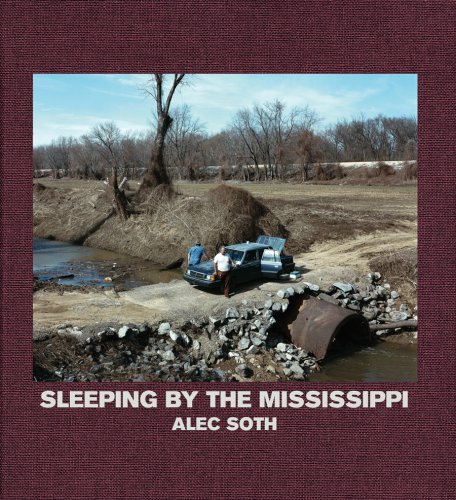 "It's hard to believe that the first edition of Alec Soth’s Sleeping by the Mississippi appeared only in 2004, so swiftly has the book become a classic of our time. Evolving from a series of road trips along the Mississippi River, Sleeping by the Mississippi captures America’s iconic yet oft-neglected “third coast.” Soth’s richly descriptive, large format color photographs describe an eclectic mix of individuals, landscapes and interiors. Sensuous in detail and raw in subject, his book elicits a consistent mood of loneliness, longing and reverie. “In the book’s 46 ruthlessly edited pictures,”writes AnneWilkes Tucker,“Soth alludes to illness, procreation, race, crime, learning, art,music, death, religion, redemption, politics, and cheap sex... The coherence of the project places Soth’s book exactly within the tradition ofWalker Evans’ American Photographs and Robert Frank’s The Americans.” Like Frank’s classic book, Sleeping by the Mississippi merges a documentary style with a poetic sensibility. The Mississippi River is less the subject of the book than its organizing structure. Not bound by a rigid concept or ideology, the series is created from a quintessentially American spirit of wanderlust. Featuring a new linen-bound cover with a tipped-on image, this is the third print run of a volume which has become one of the most widely collected and highly acclaimed photo books of recent times."-the publisher
ISBN: 3865217532
Publisher: Steidl
Hardcover : 120 pages
Language: English
Dimensions: 11.2 x 10.8 x 0.6 inches