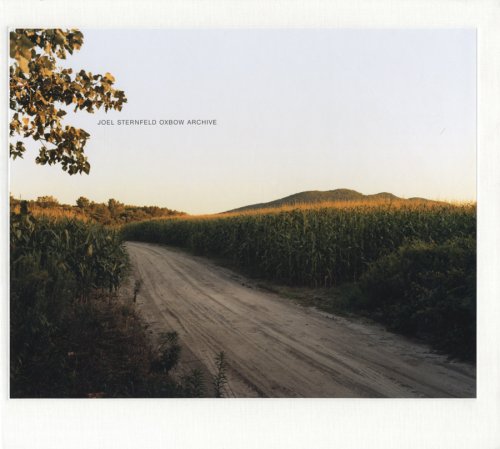 Oxbow Archive
by Joel Sternfeld
Publisher's Description
On a summer morning in 1833, Thomas Cole, a British-born, American landscape painter climbed to the top of Mount Holyoke in central Massachusetts and made a sketch of the Connecticut River where it bends and resembles an ox yoke. Three years later the sketch he made that morning became View from Mount Holyoke, Northampton, Massachusetts, after a Thunderstorm (The Oxbow).

The four by six foot painting, now a key work of American art has been described as Cole’s attempt to create a moving time/space panorama within a single frame – the passage of time is represented by the ongoing fury of the storm on the mountain as sunshine returns to the meadow below. Cole was skeptical about progress and the painting may represent a warning about the clearing of wilderness to make open land for farms and factories. Nearly two hundred years after Cole painted The Oxbow, the American photographic artist, Joel Sternfeld, walked into the mile square field depicted in the lower right quadrant of Cole’s painting. Sternfeld had first photographed this field in 1978 while traveling on American Prospects. By the time he returned in 2006, the Oxbow in the river was crossed by an interstate highway and the destructive effects of progress that Cole had feared were making themselves apparent globally as climate change.

Sternfeld spent the next year and a half walking that field, commuting to it on an almost daily basis from his home in southern Vermont. His archive is a record of classic New England seasonality, a nature study unlike any other as it is made with the foreknowledge that because of global warming it will never be the same again. His choice of subject matter, a flat unremarkable corn and potato field (archetypal new world crops), signals a conceptual stance away from previous nature depictions: his field is neither Beautiful, nor Sublime, nor Picturesque. The flatness of the field, an unusual stretch of visual freedom in the New England highlands offers an eloquent emptiness and a vessel for the true subject his work: iconic seasonal effect as manifestation of the orbiting Earth.

Sternfeld’s time landscape is also a companion piece to his recently published Sweet Earth: Experimental Utopias in America and to When It Changed (pictures at the Montreal Climate Change Conference) and needs to be understood in terms of the political and cultural resonances of those works. Joel Sternfeld is a much published and exhibited artist. Amongst his previous books with Steidl are American Prospects and Walking the High Line.
ISBN: 3865217869
Publisher: Steidl
Hardcover : 144 pages
Language: English
Dimensions: 12.6 x 11.1 x 0.9 inches