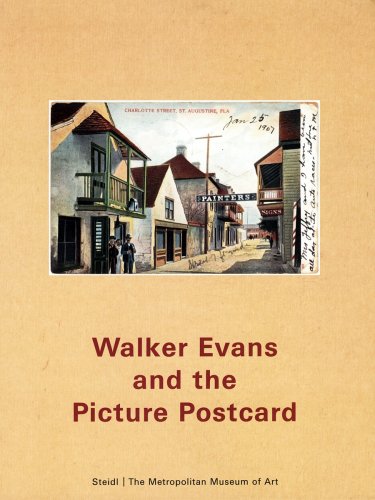 Walker Evans and the Picture Postcard
by Walker Evans
Publisher's Description
The American postcard came of age around 1907, when postal deregulations allowed correspondence to be written on the address side of the card. By 1914, the craze for picture postcards had proved an enormous boon for local photographers, as their black-and-white pictures of small-town main streets, local hotels and new public buildings were transformed into handsomely colored photolithographic postcards that were reproduced in great bulk and sold in five-and-dime stores in every small town in America. Postcards met the nation's need for communication in the age of the railroad and Model T, when, for the first time, many Americans often found themselves traveling far from home. In the Walker Evans Archive at New York's Metropolitan Museum of Art, there is a collection of 9,000 such postcards amassed by the great American photographer, who began his remarkable collection at the age of 10. What appealed to Evans, even as a boy, were the vernacular subjects, the unvarnished, artless' quality of the pictures and the generic, uninflected, mostly frontal style that he later would borrow for his own work. The picture postcard and Evans' photographs seem equally authorless, appearing as quiet documents that record a scene with both economy of means and simple respect. This volume demonstrates that the picture postcard articulated a powerful strain of indigenous American realism that directly influenced Evans' artistic development. Walker Evans (1903-1975) was the progenitor of the documentary tradition in American photography. American Photographs (1938), published to accompany his first retrospective at The Museum of Modern Art, New York, is widely considered the monograph against which all other photography books must be judged.
ISBN: 3865218296
Publisher: Steidl & Partners
Hardcover : 408 pages
Language: English
Dimensions: 8.7 x 10.5 x 1.5 inches