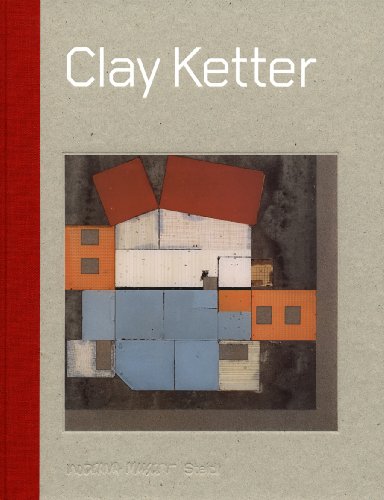 Clay Ketter
by Magnus af Petersens
Publisher's Description
Clay Ketter was first recognised for his Wall Paintings (1992–99), plasterboards with spackle over screws and joints. They were both strikingly beautiful abstract paintings and fabricated ready-mades, less finished than the wall they were hung on. Trace Paintings (1995–) is another series of paintings that resemble wall surfaces being redecorated. Traces of wallpaper, shelves and electric wiring evoke a sense of uncertainty in the onlooker as to whether this is a real wall or a painting of a wall. Combining consistency and innovation, Ketter has continued to produce works at the junctures of architecture, sculpture and painting. The variation between media, including painting, photography and sculpture, establishes layers of complexity but the terse composition of his works are always visually arresting. He falls within an American painterly tradition that started in abstract expressionism and developed into minimalism. Although the formal aspects are central in Ketter’s work, social and human issues are equally important. In his later series these have become more visual. In Gulf Coast Slabs (2007) photographic objects show traces of homes swept away by the hurricane Katrina that hit the American Gulf Coast in 2006. The series develop in his aesthetic somewhere between abstraction and realism or even fake ready-mades, both brutal and poetic. The walls and traces of architecture are this time also loaded with morally more difficult content than in his earlier works.
ISBN: 3865218458
Publisher: Steidl
Hardcover : 246 pages
Language: English
Dimensions: 8.5 x 10.9 x 1 inches