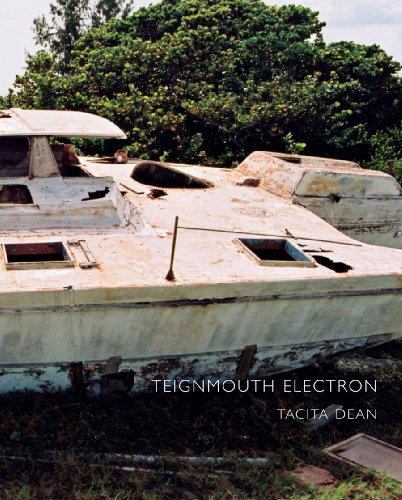 TEIGNMOUTH ELECTRON
by Tacita Dean
Publisher's Description
Teignmouth Electron deals with the tragic and extraordinary story of the amateur yachtsman, Donald Crowhurst. A particpant in the 1968 Sunday Times Golden Globe Race, a single-handed non-stop around the world yacht race, Crowhurst secretly abandoned the race but filed false reports of his progress and position to suggest his continued participation. Two weeks before he was due home to a hero's welcome, his yacht, Teignmouth Electron, was found adrift and empty.

Today his boat lies beached and abandoned at its final resting place, Cayman Brac, an island in the Caribbean. Piecing together the fragments of Crowhurst’s story from books, articles, films and recorded testimonies from people who knew him, as well as her own visit to the island, Tacita Dean negotiates the pathos and tragedy of events by constructing a loosely woven narrative of striking texts and images.
ISBN: 3865218717
Publisher: Steidl
Paperback : 72 pages
Language: English
Dimensions: 8 x 10 x 0.3 inches