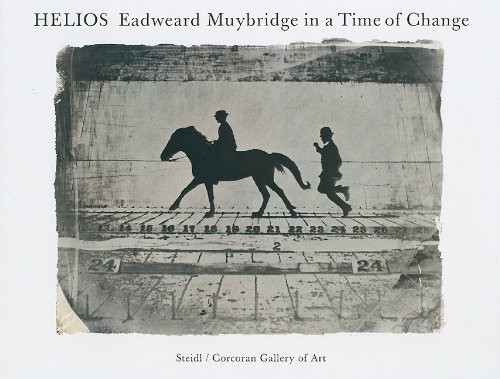 Helios: Eadweard Muybridge in a Time of Change
by Philip Brookman
Publisher's Description
In 1878, the Photographic Times claimed that ten minutes provided sufficient exposure for photographing a landscape. Six years earlier, an English immigrant to theWest Coast named Eadweard Muybridge, going by the commercial name of Helios, had already pushed photography far in the opposite direction: not to soak up time into pictures, but to divide time with the quickest exposures then imaginable. In 1872, the tycoon Leland Stanford had commissioned Muybridge to photograph his horse, Occident, to determine whether it ever lifted all four hooves off the ground at once. In proving that this was indeed the case,Muybridge achieved a five-hundredth- of-a-second exposure, and so began an anatomy of motion—in humans, horses, birds—that exploded the possibilities of photography and ultimately led to the development of the motion picture. Helios: Eadweard Muybridge in a Time of Change offers an opportunity to trace the life and art of the great photographer. In the wake of a wave of recent scholarship and renewed interest, it pitches his entire body of work against the backdrop of one of the most transformative periods of American and European history. Published to accompany a retrospective exhibition organized by the Corcoran Gallery of Art, Helios features essays by Philip Brookman, Marta Braun, Corey Keller and Rebecca Solnit that provide a variety of new approaches to Muybridge’s art and influences.
ISBN: 3865219268
Publisher: Steidl
Hardcover : 360 pages
Language: English
Dimensions: 12 x 9.3 x 1.4 inches