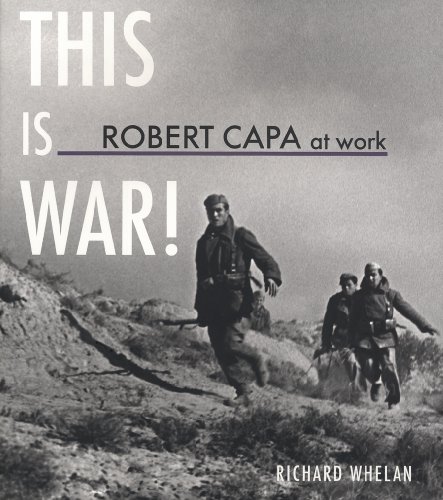 Robert Capa at Work: This is War! (American Forces in Action)
by Robert Capa
Publisher's Description
At the heart of Robert Capa’s lifework are his great images of war. This book examines in detail six of Capa’s most important war reportages from the first half of his career: the Falling Soldier (1936), Chinese resistance to the Japanese invasion (1938), the end of the Spanish Civil War in Catalonia (November 1938 – January 1939), D-day (1944), the U.S. paratroop invasion of Germany (March 1945), and the liberation of Leipzig (April 1945). In connection with the last of those stories will be consideration of why Capa did not photograph the liberation of the Nazi concentration camps, together with the revelation of his photographs from Auschwitz and Birkenau in 1948. A chapter will be devoted to each of the reportages, with extensive historical and biographical text from Richard Whelan’s thorough revision and enlargement of his definitive biography of Capa, first published in 1985. Each section will be profusely illustrated by largely unseen original materials such as vintage prints, contact sheets, caption sheets, letters, and magazine layouts, all drawn from the vast Robert Capa Archive at the International Center of Photography. The book’s introduction will be a major essay by Whelan about Capa and the rise of the picture press in Europe and America.
ISBN: 3865219446
Publisher: Steidl/ICP
Paperback : 288 pages
Language: English
Dimensions: 9.7 x 10.8 x 0.8 inches