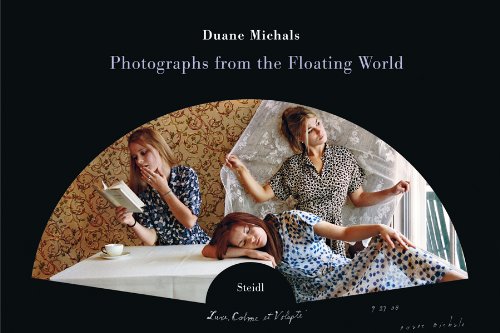 In the late nineteenth century, artists such as Degas,Whistler and Toulouse-Lautrec made interpretations of Ukiyo-e, the Japanese woodblock genre that arose during the Edo—or “Floating World”—period (c. 1620–1867). More than a century later, Duane Michals presents a modern variant on the tradition. Inspired particularly by the Ukiyo-e-influenced work of Bonnard and Vuillard, and the much earlier but sympathetic painting of Vermeer,Michals’ color shots fuse Eastern andWestern models of quietude and reverie, constructing little fictions that embrace what one might call life’s more “Japanese moments.”While he has previously used color film for commercial projects, Photographs from the Floating World marks the first instance in which Michals has employed it for his own photography. These images describe discrete moments with haiku brevity: a flower in blossom, a woman waiting, a man building a card house, a cat starting at the ghost of his master.
ISBN: 3865219861
Publisher: Steidl
Paperback : 64 pages
Language: English
Dimensions: 0 x 0 x 0 inches