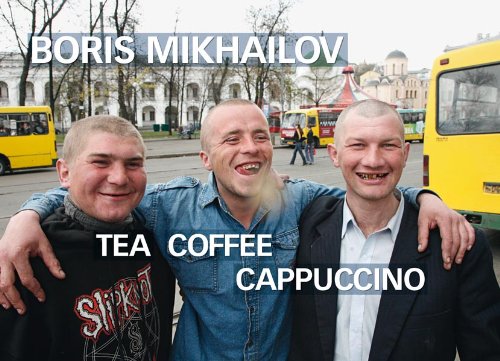 Boris Mikhailov: Tea Coffee Capuccino
by Boris Mikhailov
Publisher's Description
For the acclaimed photographer Boris Mikhailov (born 1938), a society’s most significant paradigm shifts are often most clearly perceived in the smallest of everyday transactions. For example, in a café or restaurant in the Soviet-era Ukraine, a waiter would have offered you “tea or coffee?” Today, two decades after the fall of the Soviet bloc and the ascent of western capitalism, it’s “tea, coffee, cappuccino?” In his latest body of work, Mikhailov addresses this shift by focusing on his hometown of Charkow, in the north east of the Ukraine. Here, the consumerist invasion of western capitalism is everywhere apparent in huge, colorful advertising banners and billboards, but the promises of the so-called Orange Revolution seem to have been fulfilled for only a few. Mikhailov writes that “only when one sees misery in a picture, does one begin to notice it in the street,” and throughout the 200-plus photographs in this volume, he takes pains to neither dramatize nor ameliorate the conditions of life in Charkow; and so his tough-minded pictures present a bleak but rigorously honest portrait of the Ukraine and its inhabitants.
ISBN: 3865608779
Publisher: Walther König, König
Hardcover : 240 pages
Language: English
Dimensions: 11.3 x 8.1 x 1.1 inches