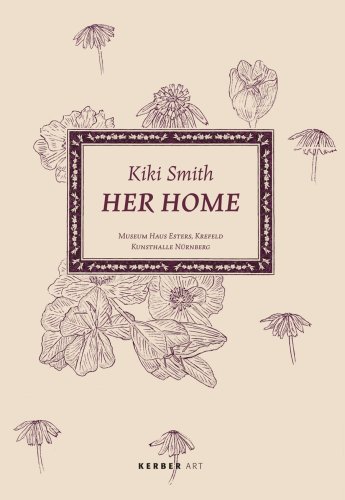 Kiki Smith: Her Home (Kerber Art)
by Ellen Seifermann
Publisher's Description
Born in 1954 in Nuremberg, Germany, but raised in an artistic family in South Orange, New Jersey (her father was the American sculptor Tony Smith), Kiki Smith has always occupied herself with questions of the human body and condition. Unlike classical figurative sculpture, which hides the insides of the body, Smith's work often visualizes the organs and the bodily fluids, highlighting the fragility and temporality of the body. Her work draws from myths and links spirit, human and animal worlds.

Beautifully produced to include a selection of family photographs from the artist's childhood and ancestry alongside generous documentation of her recent concurrent one-person exhibitions in Krefeld, Germany and Nuremberg, this volume sheds new light on one of the most influential American artists of her generation. Taking as her starting point an eighteenth-century American silk embroidery entitled First, Second and Last Scene of Mortality,' which depicts a white woman working at a table while a white child and a black servant rest on one side of her and a closed black coffin sits on the other side, Smith here develops several narrative threads that revolve around the theme of the unmarried woman. With excursions into Christian iconography and the history of the American postcolonial era, she speaks also to the archetype of the inspired female creator or artist.
ISBN: 3866781865
Publisher: Kerber
Hardcover : 168 pages
Language: English
Dimensions: 6.8 x 9.7 x 0.9 inches