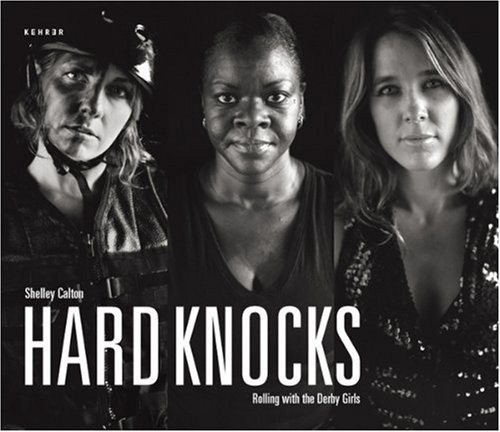 Hard Knocks: Rolling with the Derby Girls
by Shelley Calton
Publisher's Description
For a long time, Roller Derby seemed to have fallen into oblivion. Following its advent in the 1930s, the full-contact sport on roller skates rose to great popularity in the 1960s, only to be forgotten until a sudden resurgence in 2002. Several leagues were formed in the USA, most of them for women only, whose sexy costumes emphasizing their femininity formed a stark contrast with the roughness of the sport. Players get into character for the game, assuming alter egos with names like Patsy Crime, Dolly le Dukes, Tawdry Hepburn or Death by Chocolate. Shelley Calton has been making portraits of the Derby Girls ever since the sport’s revival. The Houston-based photographer vividly depicts the tempo and emotions of the game, exploring how the players’ self-image demands both a typically masculine attitude and the female erotic showcasing of their own bodies. Enthusiasm for this unusual sport has in the meantime arrived on German shores, where clubs have been established in Berlin, Hamburg and Stuttgart.