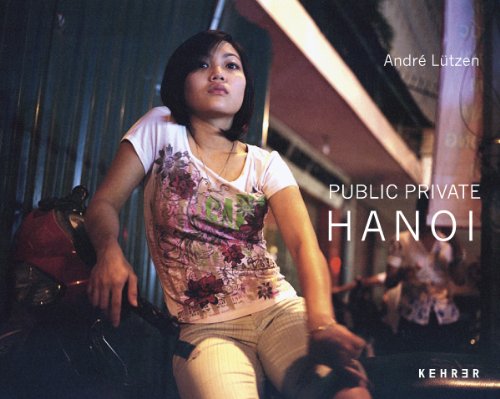 Public Private Hanoi
by Andre Lutzen
Publisher's Description
In the photo sequence 'Public Private Hanoi', André Lützen makes his way through the urban labyrinth of Hanoi by night. The city is restless, bustling, cramped. People are driven onto the streets by the heat and their confined living quarters. Doors are flung wide open. The private sphere overflows into the public realm. The boundary between in- and outside dissolves. With detailed precision, Lützen’s images depict this convergence of opposites and assume an almost cinematic character. The heady moments, the atmosphere, the intensity of the colors, the physical closeness, the constant movement are consolidated by Lützen’s camera into a complex fabric that makes life in this city almost palpable.

Like 'Before Elvis there was nothing', his last book, which unflinchingly exposed the depths and shallows of the American dream, 'Public Private Hanoi' is a story told in images that push at the boundaries of documentary photography. Lützen (*1963 in Hamburg) has won several awards for his work. He has exhibited in various international art venues as well as at numerous festivals such as the New York Photo Festival, and his work has been featured in several international publications.
ISBN: 3868281509
Publisher: Kehrer Verlag
Hardcover : 120 pages
Language: English
Dimensions: 9.4 x 11.7 x 0.2 inches