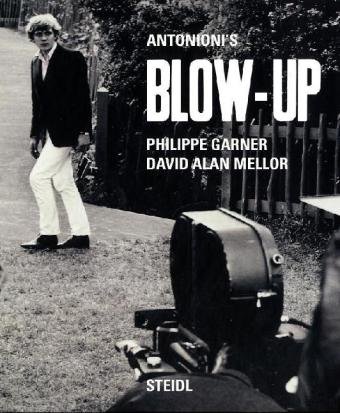 Antonioni's Blow up
by Philippe Garner
Publisher's Description
Michelangelo Antonioni’s 1966 film Blow-Up is a masterfully constructed and paced exploration of the enigmas that challenge our interpretations of both the moving and the still image. Photography plays a key role at the very core of the film, providing the metaphorical site for the director’s questioning of the relationship between reality and perceptions. This book provides a fresh and stimulating study of Antonioni’s masterpiece. It reassembles and re-tells – through onset stills and the original blow-ups – the film’s key narrative and pictorial strands in a focused visual investigation that is complemented by the authors’ analytical essays. These texts draw on new research and effectively situate the film in the social and creative contexts that informed Antonioni’s screenplay and art direction – on the one hand through an account of the milieu of fashionable photographers and models and the media through which they became so vivid a phenomenon, and on the other hand through the revelation of the artistic and literary reference points that so pervasively enrich the film. Philippe Garner is a Director of Christie’s, an internationally respected specialist in the fields of photography and 20th century decorative art and design. David Alan Mellor is Professor of Art History at the University of Sussex and is acknowledged as an authority on British art, film and photography of the last century. Both have published widely and curated a range of international
ISBN: 386930023X
Publisher: Steidl
Hardcover : 144 pages
Language: English
Dimensions: 10.1 x 11.7 x 0.8 inches