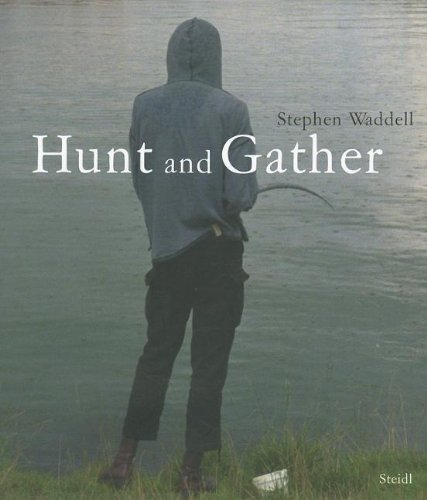 Hunt and Gather
by Stephen Waddell
Publisher's Description
“Stephen Waddell is one of those patient spirits whose art is devoted to depiction, to the contemplation of sight itself. This is neither the oldest nor the original form of art, nor possibly the most significant these days, but it may be the most stable, consistent, and richest in possibility. Its models are Velázquez, Cézanne, Manet, Atget, and Walker Evans. Waddell’s photographs are usually taken surreptitiously in public places.… He concentrates on notation and suggestion, a delicate and circumspect observation of people in their labor, leisure, and their solitude. He almost never alters anything with a computer.

Waddell is an outstanding colorist and has a material, chemical feeling for color, both as pigment in painting, and as any and every colored object and creature he encounters with his camera. A photographer who works as Waddell does can’t pick and choose the colors of the things depicted the way a painter can; he or she has to take them as they are and take them quickly. But there are still ways of composing in color, even under these conditions, and Waddell knows about these ways.…” Jeff Wall in Art on Paper

The photographs assembled in this book were mainly taken in Germany, others are from the last twenty years in Japan, Italy, France, Vancouver, and Lebanon. They give an overview of Stephen Waddell’s photographic work, recently honoured by the Liliane Bettencourt Prix de la Photographie 2010.

Stephen Wadel was born 1968 in Vancouver, British Columbia. His parents were involved with the arts and he took courses at Simon Fraser University with Jeff Wall. He began making photographs as a means of “sketching” in preparation for paintings, but by the late 1990s he came to photography seriously in its own right. His work has been widely exhibited and is part of international collections. In 1998 he moved to Berlin and proceeded to work there for the next ten years before returning to Vancouver, where he resides today.
ISBN: 3869301155
Publisher: Steidl
Hardcover : 96 pages
Language: English
Dimensions: 10 x 11.3 x 0.7 inches