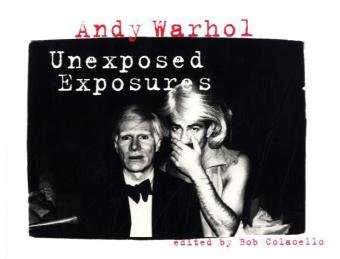 Andy Warhol: Unexposed Exposures
by Bob Colacello
Publisher's Description
Starting in 1976, Andy Warhol shot several rolls of film every week and selected images for his book Andy Warhol’s Exposures, published in 1979. He had intended to title it Social Diseases but his concept was heavily watered down by his publishers at the time and many of the selected images were removed. This book presents the previously unpublished and unexhibited photographs, over 70 unique vintage black and white photographic prints, that Warhol originally selected for his book. It has been edited and introduced by Bob Colacello, who was also executive editor of the original book.

“There is a sense of intimacy as well as of voyeurism, of funny-looking, insecure, wistful Andy, through flattery and attentiveness, trying to connect. Yet, because he was not just any photographer but a famous artist, a star, there is often a sense that the looking is being done at the man with the camera as well as by him. In some cases, the subjects are clearly performing for their fellow luminary, or close friend, or boss. As spontaneous as these images may seem, they are intrinsically staged, with Warhol himself as both chronicler and catalyst of the moments he is documenting. And what moments they are! Only Andy could get David Hockney in extra-brief running shorts, or Susan Sontag batting her eyelashes across a fancy restaurant table at Gloria Vanderbilt, or Halston’s Venezuelan window dresser and lover, Victor Hugo, sitting under Goya’s Red Boy in Kitty Miller’s Park Avenue parlor… ” Bob Colacello
ISBN: 3869301163
Publisher: Steidl
Paperback : 132 pages
Language: English
Dimensions: 8.4 x 6.7 x 0.7 inches