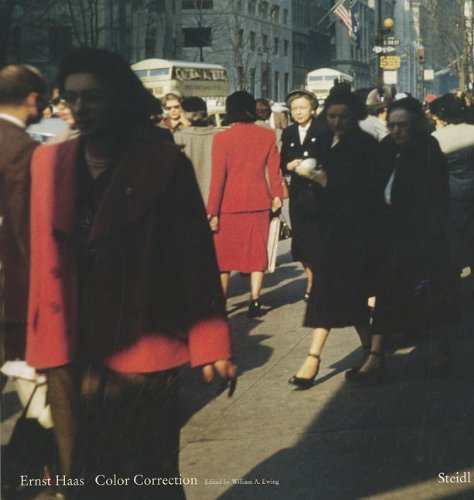 Ernst Haas: Color Correction
by William A. Ewing
Publisher's Description
Ernst Haas is unquestionably one of the best-known, most prolific and most published photographers of the twentieth century. He is most associated with a vibrant colour photography which, for decades, was much in demand by the illustrated press. This colour work, published in the most influential magazines in Europe and America, also fed a constant stream of books, and these too enjoyed great popularity. But although his colour work earned him fame around the world, in recent decades it has often been derided by critics and curators as “overly commercial”, and too easily accessible – or in the language of curators, not sufficiently “serious”. As a result, his reputation has suffered in comparison with a younger generation of colour photographers, notably Eggleston, Shore and Meyerowitz.

Paradoxically, however, there was also a side of his work that was almost entirely hidden from view. Parallel to his commissioned work Haas constantly made images for his own interest, and these pictures show an entirely different aspect of Haas’s sensibility: they are far more edgy, loose, complex and ambiguous – in short, far more radical than the work which earned him fame. Haas never printed these pictures in his lifetime, nor did he exhibit them, probably believing that they would not be understood or appreciated. Nonetheless, these works are of great complexity, and rival (and sometimes surpass) anything done at the time by his fellow photographers. This book is intended to correct the record.
ISBN: 3869301368
Publisher: Steidl
Hardcover : 200 pages
Language: English
Dimensions: 10 x 10.6 x 1 inches