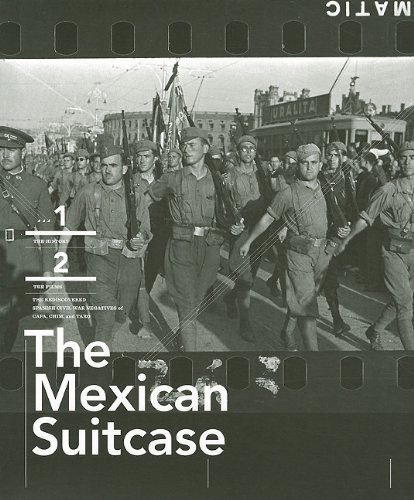 The Mexican Suitcase
by Cynthia Young
Publisher's Description
Sometimes, even in the world of photography, miracles happen. On 19 December 2007, three battered, commonplace cardboard boxes arrived at the International Center of Photography in New York. Within these boxes – the so-called Mexican Suitcase – was a treasure trove of photographic history believed lost since World War II: the legendary Spanish Civil War negatives of Robert Capa, Gerda Taro, and David Seymour (known as “Chim”).

The Mexican Suitcase contained 126 rolls of film, mostly shot between May 1936 and spring 1939, that are an inestimable record of innovative war photography and of a definitive episode in Spanish history. The photographs include Capa’s images of the Battle of Rio Segre, Chim’s famous image of a woman nursing a baby at a land reform meeting in Estremadura, and Taro’s last photos at the Battle of Brunete where she was killed in 1937.

The story of the Mexican Suitcase itself is as fascinating as the photographs it contained. Carried by Capa’s studio manager from Paris to Bordeaux by bicycle in 1939, it came into the possession of General Francisco Aguilar González, the Mexican ambassador to the Vichy government in 1941–42, and found its way to Mexico City. Decades later the suitcase was discovered among González’s belongings and in 2007 was given to ICP, founded by Robert Capa’s brother Cornell Capa and home of the Capa and Taro archives as well as a large Chim collection.

In 1979, Cornell Capa had implored the public to come forward with information about the Mexican Suitcase which he had spent years looking for: “Anyone who has information regarding the suitcase should contact me and will be blessed in advance.” This landmark two-volume publication, which accompanies a major exhibition at ICP and reproduces all 4,500 negatives from the suitcase, embodies the blessing Capa spoke of and presents the miraculous contents of the suitcase to the public for the first time.
ISBN: 3869301414
Publisher: Steidl
Paperback : 750 pages
Language: English
Dimensions: 9.8 x 11.9 x 2 inches