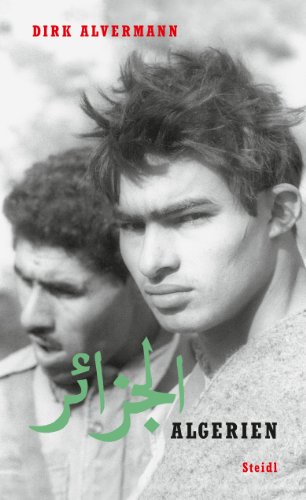 Algeria
by Dirk Alvermann
Publisher's Description
When he went to Algeria in the 1950s Dirk Alvermann was only eighteen, a rebellious West German teenager thrilled by the struggle for freedom by the Algerian people against French colonial rule. Together with a unit of the Algerian liberation army, he found a way to cross the hermetically sealed border from Tunisia into the Eastern Algerian war zone, determined to keep a photographic record of the events unfolding there.

After his return to West Germany he set about planning the publication of his work in the most accessible form available. The book should go from hand to hand like a political manifesto. In 1950 German publishing house Rowohlt had introduced its pocket book series, known by the name rororo – an ideal format for the book Alvermann intended to produce. At first, Rowohlt agreed to publish the book but later canceled it when any partisanship with the Algerian resistance seemed inappropriate. The book was finally published by the East-Berlin publishing house Rütten & Loening in 1960 as a hardcover, contrary to Alvermann’s vision for the project.

Steidl’s new edition of this important and classic book gives voice to the artist’s original intentions, adopting the rororo format and softcover finish. The photographs are accompanied by historical documents, quotes taken from French military sources, and from pamphlets, newspapers and magazines.

More than fifty years after its first publication, the book is as relevant as ever as it tells the story of a people rising up against oppression and despotism: against European colonialism or, like today, against homemade dictatorial regimes.
ISBN: 3869302550
Publisher: Steidl
Paperback : 224 pages
Language: English
Dimensions: 4.5 x 7.2 x 0.6 inches