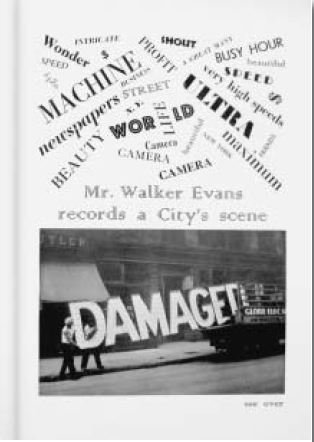 Walker Evans (1903-1975) was one of the most important and influential artists of the twentieth century, producing a body of photographs that continues to shape our understanding of the modern era. He worked in every genre and format, in black & white and colour, but two passions were constant: literature and the printed page. While his photographic books are among the most influential in the medium’s history, Evans’s more ephemeral pages remain largely unknown. From small avant-garde publications to mainstream titles such as Harper’s Bazaar, Vogue, Architectural Forum, Life and Fortune he produced innovative and independent journalism, often setting his own assignments, editing, writing and designing his pages. Presenting many of his photo-essays in their entirety Walker Evans: the Magazine Work assembles the unwritten history of this work, allowing us to see how he protected his autonomy, earned a living and found audiences far beyond the museum and gallery.

Walker Evans began photographing in the late 1920s. He moved quickly to define his aesthetic and his subject matter: straight and sober photographs of American everyday life and its environs. Within a decade he had produced some of the most significant photographs of the twentieth century, exhibited at the Museum of Modern Art, New York and published two landmark books (American Photographs in 1938 and Let us Now Praise Famous Men with James Agee, in 1941). He wrote art and film reviews for Time (1943-45), was employed by Fortune between 1945 and 1965 and taught at Yale thereafter.
ISBN: 3869302593
Publisher: Steidl
Hardcover : 144 pages
Language: English
Dimensions: 0 x 0 x 0 inches